Okay, so I haven’t seen this movie yet, but I want to. Very much badly!

You’ll remember from my Easter post last year that I love how Louie Giglio uses pictures from the Hubble Telescope to show God’s amazing creation. The heavens declare His glory, and now we can get an even more exciting veiw of God’s handiwork via Hubble 3D in Imax. 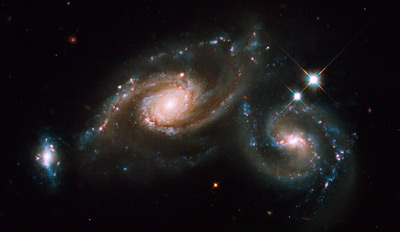 I want to see this so badly, but the timing is totally off for me. But I’m trying to figure out a way for my dad and I to get to see it next week. We’ll have to see what we can work out.

Anyway, visit the website and find out if it’s playing in your area. I hope you all get to go see it.

I first saw Louie Giglio speak in person on the Indescribable Tour with Chris Tomlin. As you will likely guess, Chris was singing his song Indescribable and Louie … well, Louie was speaking about the magnitude of who God is. He used pictures from the Hubble Space Telescope to talk about how huge God is. When we consider that God spoke the heavens into existence (according to Isaiah) and then think about how massive they are,  it’s pretty incredible the size of the God who still knows us each by name.

One of the things that Louie said that really stuck with me was that the heavens are created to bring glory to God. That the starry hosts tell His story and declare it to us. In honor of Good Friday and Easter this Sunday, I thought I’d share a couple pics from Hubble that tell the story of Jesus Christ.

But first, a quick note about Hubble and where I found these and you can find other amazing pictures of God’s creation: According to the official website www.hubblesite.org Hubble Space Telescope’s launch in 1990 sped humanity to one of its greatest advances in that journey. Hubble is a telescope that orbits Earth. Its position above the atmosphere, which distorts and blocks the light that reaches our planet, gives it a view of the universe that typically far surpasses that of ground-based telescopes. It has beamed hundreds of thousands of images back to Earth, shedding light on many of the great mysteries of astronomy.

That Christ suffered the crown of thorns and the cross so that we could have forgiveness and life amazes me. I hope it amazes you this Easter too.

And because I love Louie too and he speaks truth, here’s a clip of the end of his Indescribable talk. It’s available on dvd along with several other great talks by him. Check out his cool Passion ministry here.

Just thankful for grace until next time. -LJ