In honor of this day (and since it’s Friday), I want to share with you one of my all-time favorite Christmas songs, put to this amazing video. Enjoy Downhere singing How Many Kings? and ask yourself how many kings would do what God did to romance this world.

A holy God loves you so much that He gave His only son that whosoever believes in Him shall not perish but have everylasting life. That’s the message of Christmas, and the good news of the Gospel.

You have good reason to be merry today and every day! 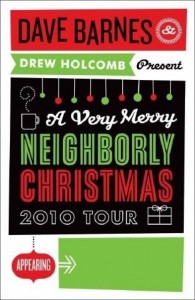 As you’ll all likely recall, I recently saw Brandon Heath (my favorite!) at the Bluebird here in Nashville. He was excellent. We met. Yada yada. Anyway, I went to the show with my sweet friend Katie, who really went to support me and my desire to see BHeath. But as she so eloquently put it–she only had eyes for Dave Barnes.

Dave was delightfully funny and ridiculously talented, as he often is. Which prompted us to see when we might be able to see him next. Turns out that was this weekend at the final show of his A Very Neighborly Christmas Tour.

So on Saturday night we got all gussied up. (I mean, I put on my mascara, and I can’t even remember the last time something rated me risking putting my eye out with that evil little wand.) First we went to a lovely Christmas party, hosted by some of Katie’s friends. I met a fun lady who works at the same place I do, but he had never met! We thoroughly enjoyed the Christmas conversation and festivities, but soon we were off to see Dave, who was sharing the stage with Drew Holcomb and a litany of special guests.

One of the reasons I love Nashville–there were musical guests gallore! Including a very fantastic duet by none other than Brandon Heath and Matt Wertz, singing an original Christmas song. (Love you guys!)

Between the Christmas tunes and the standards from thier regular albums, Dave and Drew had the Tennessee Performing Arts Center theater rocking for almost three hours. But the best part–well … the best part of any Dave Barnes show–in my opinion–is the comedy routine Dave sneaks in there. Like how he joked about the crowd getting together before the show to practice the audience participation parts. Or how he had me nearly falling out of my chair as he told the story of singing (or rather lip synching) his hit God Gave Me You on All My Children.

Both Katie and I were laughing all the way home, just remembering the silly things he said. What a fun night!

So in honor, of the Very Neighborly Christmas Tour, here’s one of my favorite videos of Dave singing some really special Christmas tunes in his first annual Christmas Extravagan-za.

Confession: I’ve been thoroughly enjoying Christmas cookies this year. I’ve made some of my own. I’ve snagged some from office gift baskets. They’ve been oatmeal raisin. Chocolate chip. Even cherry cordial with a brownie cookie base. (Good stuff!)

And I hope that I’m the only one who’s been indulging a little too much. But given other blog posts I’ve seen lately, that may not be the case. So I’d like to share a blog post from a friend and fellow-writer Ane Mulligan, where she shares all of her very special Christmas Cookie Rules here.

A few of my favorites:
If you eat a Christmas cookie fresh out of the oven, it has no calories because everyone knows that the first cookie is the test and thus calorie free.

If you drink a diet soda after eating your second cookie, it also has not calories because the diet soda cancels out the cookie calories. (I knew there were extra benefits to loving diet Dr. Pepper!)

Any cookie calories consumed while walking around will fall to your feet and eventually, fall off as you move. This is due to gravity and the density of the caloric mass. 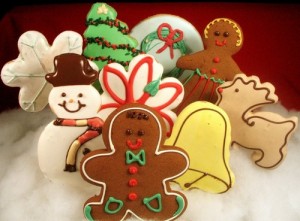 So enjoy your cookies this holiday season. And if, like me, you’ve had a few too many cookies so far, hang in there. Keep eating your fruits and veggies and try to sneak in a walk whenever you can (and not just because your cookie calories are dropping off with every step).

Well, it would seem that the calendar year is quickly coming to a close. And with that, it seems like a good time to check in on the good, ol’ 30 by 30 list. A little over 4 months in–over a third of the year gone–so how far along am I? Well, let’s see …

Well, by my count that’s 5 completed. Only 1/6 of the way done. Guess I should get rocking and rolling. How are you doing on the goals you set for yourself this year?

On the Sunday morning before Thanksgiving, I joined my mom, sister, and 2 nieces at the morning balloon launch from the Yuma West Wetlands Park. We bundled up in sweatshirts and tennis shoes (it wasn’t exactly snowing) and headed out for the park. It turned out to be a little chillier than we expected, but we sure had a good time watching the balloons billowing with air and lifting off the ground. While Rachel was easily scared by the huge balloons, we all offered our “oohs” and “ahhs.” Here’s some pictures from our adventure.

Rumor has it that it snowed in Nashville this week. I personally saw about half of a flurry. Seriously. This was not snow. But it has been awfully chilly. Scarves and winter coats-chilly. Which has put me in the mood for Christmas!

And that means decorating! So here’s a picture of my tree (tiny though it may be) and the colorful lights adorning my back window. 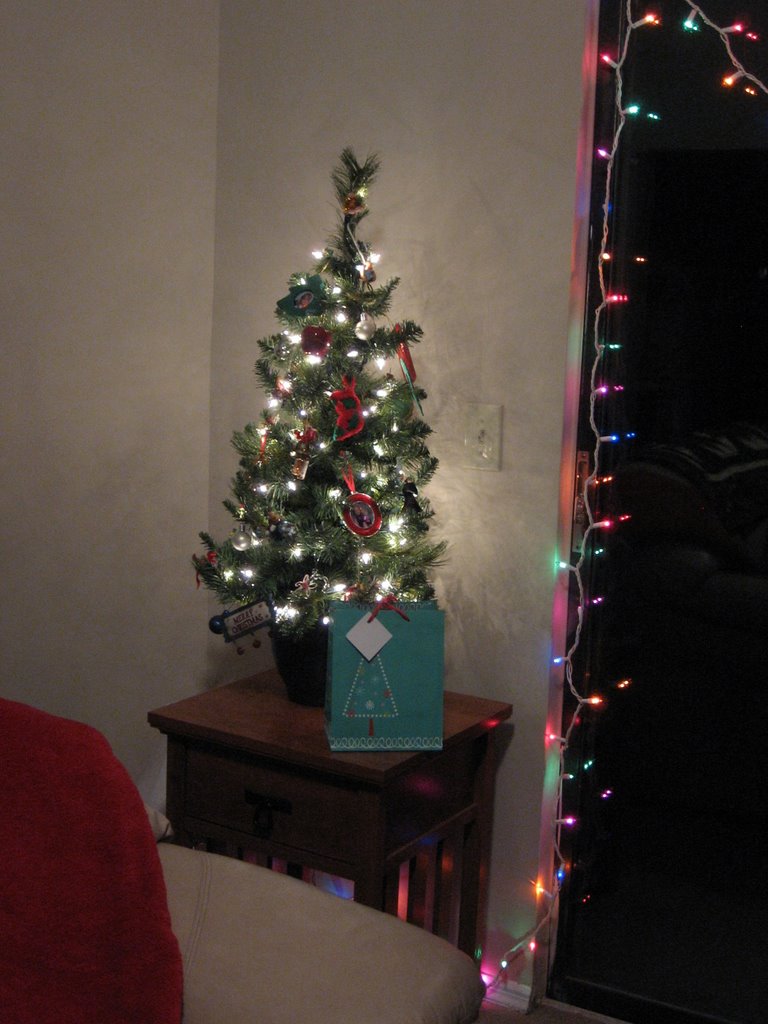 And if you’re counting, I’d say that about half my ornaments are either pictures of my nieces and nephews or made by them.

What are you doing to get into the Christmas spirit?

There are fewer things sweeter to me than spending time with my favorite three nieces, 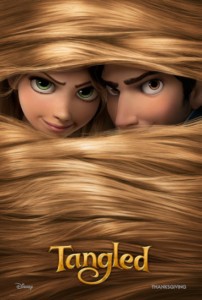 Julia, Rachel, and Emily. When I was home at Thanksgiving, I invited my nieces, their moms, and grandma to go see the new Disney movie Tangled with me.

For Rachel and Emily, this was their very first movie in the theater. And I got share it with them!

We all loved it! It’s such a cute, funny Disney movie for the whole family. This retelling of the Rapunzel tale includes the dashing thief, Flynn Rider, and the wildly funny dog-horse Maximus. 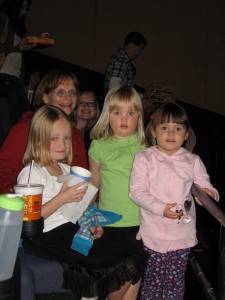 I’m not sure if my favorite moment was the release of the floating lanterns in the movie or when Emily ate popcorn off the floor, and her mom freaked out! It was such an adventure. The girls loved the movie, and I loved getting to take them. What a great part of my trip home! 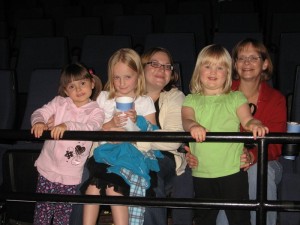