This week’s teaser is:
” She was at least free from the offence of Mr. Darcy’s further notice; though often standing within a very short distance of her, quite disengaged, he never came near enough to speak. She felt it to be the probable consequence of her allusions to Mr. Wickham, and rejoiced in it.”
pg. 102  – Pride and Prejudice by Jane Austen

– I recently joined a bookclub with some girls at work. Every Tuesday we get together at lunch to talk about the book we’re reading. Right now, that would be Pride and Prejudice. If you can believe it, I’ve never finished this book, so I’m super-excited to get all the way through it. Oh, that Mr. Darcy! 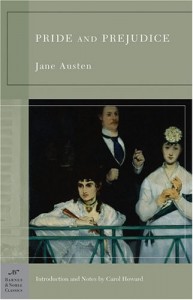 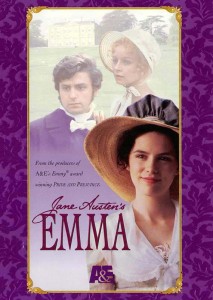 After my recent move, I was looking for someone to share my affection for Jane Austen. I needed a friend to watch the most romantic movies ever with. So last weekend I invited a new friend over, and she brought her collection of Jane Austen movies. We watched an older version of Emma, staring Kate Beckinsale in the title role. I’d never seen it before, so I was eager to watch it.

Apparently my enthusiasm was misguided. In this 1996 version of the story that I have enjoyed in every other version I’ve seen it, neither Emma or our hero Mr. Knightley are likable characters. Knightley is played with such intensity, that every time we see him, he’s either brooding or lecturing Emma. We miss all the humor and playfulness of Knightley in the other versions of Emma. And the actor playing Knightley isn’t what I would picture as an Austen hero. He’s got nothing on Jeremy Northam a 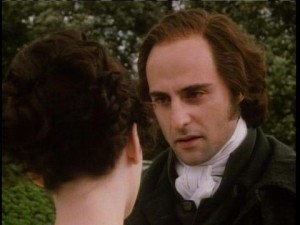 And Emma wasn’t any better. Always so serious, her intentions seemed self-serving, never for the best for her friends.

Don’t get me started on the creepy lines in the movie either, like at the end when Knightley says to Emma, “I held you when you were 3 weeks old.” And she responds, “Do you like me as well now as you did then?”

And the continued brother/sister comments. We know that they grew up close, but there’s no need to keep the comments coming. Just plain creepy. 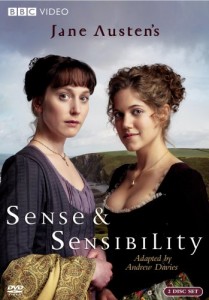 If you’re looking for a good version of Emma, check out the one with Gwenyth Paltrow or the new one with Jonny Lee Miller and Romola Garai. Those are both much more enjoyable.

So then this weekend, I invited my friend over again, this time to watch Sense and Sensibility, a 2008 version I hadn’t seen yet. This one was really excellent. Nearly three hours of beautiful landscapes and coast shots and a very, very handsome Edward. Well-acted and well-filmed, it was fun to watch.

And while the actresses who played Eleanor and Marianne were really great in the roles, there were moments when I felt like they were playing Emma Thompson and Kate Winslet, who stared in those roles in the quintessential Sense and Sensibility directed by Ang Lee. I quite enjoyed this one, and I think you might too.

I saw this on my friend Kaye’s blog, and it made me smile–no mean feat since I’ve picked up whatever has been making Amy cough up a lung all week. Thanks for the grin, Kaye. Hope everyone else enjoys this little montage of some of my favorite guys from Jane Austen and other period dramas. I think Bingley’s delightfully high hair made me smile the hardest. Of course, the inclusion of Mr. Rupert Penry-Jones from Persuasion automatically puts this on my favorites list.