I spent all of January, February, and most of March writing my next book. Whew! It was a lot of writing in not a lot of time, and to get it turned in by my deadline, I had to give up one of my favorite things–READING.

Every minute that I wanted to be reading, I knew I needed to be writing, so I cleared the pile of books off my nightstand and got to work. Two and half months and a complete manuscript later, I looked at my to be read pile–that had somehow managed to grow 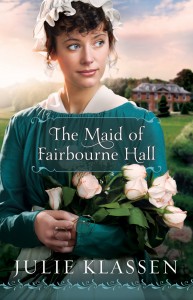 –and dove right in. I hope to tell you about several of the books I’ve read since then, but I wanted to start with The Maid of Fairbourne Hall by Julie Klassen. Set in the English countryside and dealing with the upstairs and belowstairs and the lives of masters and servants, I hoped it would appease by craving for something–anything–Downton Abbey-esque. Turns out, I was right.

I picked up all 410 pages of this book on a Thursday morning plane ride and finished it by the next evening. I couldn’t stop reading the fascinating tale of the belowstairs, as seen by a lady of leisure.

The pace is nice and easy, with just enough intrigue to keep me turning pages, but never more than seemed to fit. I was transported to 1815 and the life of spoiled soon-to-be heiress Margaret Macy. I didn’t love her at first. I didn’t even like her very well–that is until she risked her own life to help a well-to-do coach driver and his unseen passenger. And of course, the hero Nate was everything a good romantic hero should be. Flawed and imperfect, yet absolutely redeemable.

One of my few complaints is that I thought it ended a bit abruptly. I’d have liked to read more about Nate and Margaret. But maybe that’s just a sign of a good book. You never want it to end.

If you’re looking for a trip to 19th Century England, open the pages of The Maid of Fairbourne Hall and dive in. I think you’ll be glad you did.

I’ve officially set up my author page on Facebook, and I’d love for you to join me there, as well. Last week I was chatting with readers about who I should cast as the hero of the book proposal that I’m currently writing. Next week, who knows. 🙂 (Time for shameless self-promotion.) Swing by www.facebook.com/lizjohnsonbooks and “Like” my page to join in the chat about what’s going on with my books.

And if anyone has any good ideas for a header for my FB page, I’d greatly appreciate them. 🙂

It’s been quite a while since I’ve done a Monday Movie Review … but after seeing The Artist this weekend, I just had to share. In honor of Good Friday, my office was closed. When I woke up that morning, I was a bit lazy, trying to decide how best to use my day off. After all, there were books to be written and shopping to be done and a million other things clamoring for my time. I know you know the drill.

But I had a hankerin’ for a good movie, so I flipped through my Fandango app on my phone to see what was playing. Even 12 o’clock matinees are $7.50, so I wasn’t interested in wasting my money on something that might not even be worth a buck at the Redbox. After a little hunting, I found that my local theater had a 12:15 showing of The Artist.

Maybe you didn’t hear much about this black and white, silent movie before it walked away with the Oscars for Best Actor, Best Director, and Best Picture at the Academy Awards ceremony back in February. Maybe you still haven’t heard much about it. Maybe the silent picture part of it isn’t your cup of tea. Maybe black and white isn’t your ideal. After all, didn’t Dorothy go all the way to Oz to get out of black and white? I was hovering somewhere in there, but knew this might be last chance to see it in the theaters, so I gave it a shot.

Here’s the thing, the movie is just how it’s described by the reporters–it’s an homage to the silent movies of the 1920s and the tale of Hollywood’s rocky transition to the “talkies”.

Except that’s not really what the movie is about at all.

French actor Jean Dujardin plays George Valentin, a silent film star at the top of his game and a household name in 1927. He’s Hollywood’s main squeeze and favorite face. And he’s all about seeing his face on the big screen and his name in marquee lights. Mostly he’s all about himself. Sure he puts on a show and is so handsome that it’s easy to forgive his arrogance as he steals the spotlight from his costars. George (and his ridiculously adorable dog) is so likeable, that I was rooting for him to succeed, even when he refuses to try a talking picture–telling the studio owner that he’s the draw. His name will bring in scores of audiences to a silent picture that he’ll write, produce, direct, and star in. So he dumps all of his money into making a movie that was always doomed to fail. And then the stock market crashes.

In contrast Peppy Miller (played brilliantly by Berenice Bejo–who lit up the screen every time she was on and deserved far more accolades than she received for this role) is an aspiring actress, primed to hit the big time on the cusp of the talking movie revolution. While George descends into his self-made demise, Peppy’s star is rising and rising and rising. And in her, we see not a direct contrast to George’s ego, but rather a version of who George could have been–faults and all. We see her generosity of spirit and genuine concern for a man who often doesn’t deserve it.

And we see how accepting that generosity changes him.

The truth is, on the surface this is just a fun movie. The music is amazing, the story interesting for any movie buff (I could draw endless comparisons and contrast to Singin’ in the Rain), the actors handsome and especially skilled, and the dog incredible. What the sound technicians did was incredible. And how the whole story of George’s life can be told through his mustache still makes me smile.

Maybe these are reasons enough for you to see it. Good. Do.

If they’re not, I’d challenge you to watch it for the reminder of pride that so easily entangles us. All weekend I have found myself thinking about The Artist as I face struggles in my writing. How easy it would be to refuse to face writing trials head on, instead asking don’t they know who I am? Don’t they realize how special/important/talented/amazing I am? But the truth is that there are those who have generously poured into my writing life, and accepting their gifts changes me and demands more of me. It reminds me that I’m not doing life–or this writing thing–on my own. I owe them better than arrogance. I owe them the humility it takes to make changes to chapters or whole story lines when that’s asked of me. It’s the least I can do … Actually, it’s the best I can do.

Have you seen The Artist? What did you think?

Just want to wish you all a very happy Easter! I hope you’ll take some time today to ponder just how much God did to win your heart. I was reading in Max Lucado’s He Chose the Nails this week and was struck by this statement. “God was never more sovereign than in the details of his Son’s death.” I don’t know about you, but that brings me to my knees. How amazing that God would send his only Son to die on the cross–and He picked the tool of torture. He chose the time and place of Jesus’ death. All of that was part of God’s plan for the salvation of man.

I’ve been hearing the song “Hero” by Abandon on the radio a lot lately, and I think it’s really suited for Easter, on this day we remember Christ’s resurrection and defeat of the grave. Hope you enjoy.