This year, I challenged myself to read all 6 of Jane Austen’s books. How hard could it be? I have many friends who’ve read all of her books and loved them. And I’ve seen nearly every movie version of her books from Colin Firth’s Mr. Darcy in Pride and Prejudice to JJ Fields as Henry Tilney. I’ve watched and rewatched these love stories, falling in love as much as any of the characters. And I’ve considered myself a fan of the venerable Ms. Austen. I’ve even read some of the spin off books–like Beth Pattillo’s Jane Austen Ruined My Life, which was superb, and seen movies like Becoming Jane and The Jane Austen Book Club.

So why is it that a book-lover and romantic like myself can’t seem to get through these 6 books?

I have a theory. One that I shared with my friend Katie, who challenged me to write this blog. Maybe the book isn’t always better …

When Jane’s books were first published in the early 19th Century, the understanding of and appreciation for novels were still growing. Many belittled the practice of reading novels, as Jane herself explains in Northanger Abbey, when she spends 3 pages writing about how she’s not one of those authors who refuses to let her characters read novels. Thus Catherine Moorland, our heroine, indulges in the very thing that Jane hopes her own readers would do. Enjoying novels.

By taking the time to do this, Jane breaks every rule of modern novel writing. As a student of modern fiction, I see how Jane’s books conform to her own ideals and the current trends of her time, not ours. I also see 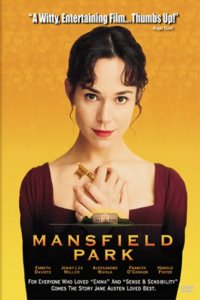 how many of the movie versions have modernized some of Jane’s stories to fit with our ideas of drama and conflict.

Let’s take Mansfield Park, for example. I just finished listening to the unabridged audio version of the book. And I didn’t like it. At all. And I hated myself for not liking it. How could I not?  To start with Fanny Price, the so-called heroine of the story, is weak and never really grows throughout the story. The one opportunity for her to assert herself comes when her uncle tells her she ought to marry the duplicitous Henry Crawford. She tells him that she won’t. He says she must. She tells him no. And that’s pretty much the end of the conflict.

Compare this with the 1999 movie version staring Frances O’Connor, where Fanny is a smart young woman, who holds her ground even when her uncle demands that she marry Crawford or be sent back to her parents’ home. The conflict is much more acute in the movie version, and it makes me feel for Fanny’s plight rather than feel as though she is a petulant child.

Many of the movie versions of Austen’s classics have modernized the characters–not by placing them in a different time, but rather by strengthening and changing the characters and conflicts in such a way that they fit more in line with modern ideals than they do with the original release dates. This is why many Austen purists dislike the films. Not only do they trim plot elements for timing, the movies sometimes change the entire conflict of the novel.

But for me, the change seems to be mostly for the better. When it comes to Ms. Austen, I must say that I think I far prefer to the movies to the books (at least the nearly 4 books that I’ve read all or parts of).

Please feel free to disagree. Just don’t do it by throwing stones. 🙂

With just a week until my 30th birthday, it’s high time to check in on the official 30 by 30 list. SPOILER ALERT! I’m not going to finish it all. But, you know what? That’s okay. I’ve pushed myself to do more things than I would have done without this list. Without further ado … here’s the most recent update to the list.

By my count, I’ve completed 17 of the items on my list (or a comparable item) in the last 51 weeks. And I think I can complete at least 1 or 2 more this week. Not too shabby. 🙂 I’ve definitely done some things this year that I wouldn’t have without this list. But I think my next list will include a few less things that require travel or money. Vacation time and spare change is hard to come by these days.

What do you think should be on my next list?

This weekend we celebrate the closing of a decade of magic.

In 2001, my brother dragged me to see a little movie called Harry Potter and the Sorcerer’s Stone. I was sure I would hate it. I did not. I fell in love with the magical world or Harry Potter and jumped into the books. Throughout the years I’ve been to many a midnight release for both the books and movies. I even made a one-of-a-kind t-shirt for the release of the last book and 5th movie.

On Thursday, I pulled out that shirt and took off for the theater about 10pm, ready for Harry Potter and the Deathly Hallows Part 2, the 8th and final movie in the series. Despite a ridiculously disorganized movie theater that didn’t let us inside until 19 minutes before the show started, the movie itself was nearly everything I could have hoped for.

I wanted to cry. I really did. But there were no tears for me this time. Several of the most poignant moments in the book are trimmed, leaving my tears inside. And when I went to see the same film less than 24 hours later, I still didn’t cry, despite the many sniffles coming from those around me.

Here’s what I know. It was a pleasure to watch. I loved it! And I didn’t have to cry to feel the emotional impact of the quintessential battle of good vs. evil.

As my friend Kristi and I were driving away to see the midnight release, I tweeted (perhaps I should clarify, that I wasn’t actually behind the wheel when I was tweeting) about my excitement and ended the tweet with a “y’all.” And it made me giggle. How would Harry Potter be different if it was set in the South? So I tweeted several of them. Here’s the complete list, in case you missed them.

If Harry Potter were set in Nashville …
… Ron would sport a wicked business in the front party in the back mullet.
… Harry drives an F150 instead of a Nimbus 2000
… Hermione needs mega auquanet to handle the humidity
… Gryffidnor is actually Future Farmers of America
… instead of quiddich, they do rodeo
… Fred and George quit school to become country music stars (Fred and George are the new Brooks and Dunn)
… uniforms include wranglers and cowboy boots

4 – The number of days we’ve made it into July. It’s our day to celebrate America’s Independence and thank the many many men and women who have served to keep America free. THANK YOU!

171 – the number on my very first runner’s bib. I’ve never run in a road race before! Yay!

6 – the number of encouraging signs being held by bystanders that made me laugh. They included: Kick Asphalt! No wonder your feet are hurting, you’re kicking A**! Keep running, people are watching.

1/2 – the number of oranges I ate after the race

1 – The number of finish lines I was supposed to cross but missed because I was in the wrong lane. Oops! I’m so lame!

And now that my dear friend and workout buddy, Katie, and I have finished the race, it’s time to celebrate! There will be cheesecake and dancing in the streets. Well, at least cheesecake. 🙂