Hi friends,
I’ve been conspicuously absent of late mostly because I’ve been on deadline. I know, it’s no excuse, and I won’t have a new book for you to read until September, but that doesn’t mean there aren’t some great new books coming out this summer. I’m super- 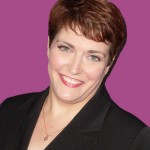 thrilled to introduce you to my good friend Kaye Dacus and her new book Follow the Heart.

Kaye and I get together to write every week, so I’ve been hearing about this book for months, and, you know what? It’s fabulous! (And I’m not just saying that because my name appears on the dedication page.) 🙂

Here’s a bit about the story:
Kate and Christopher Dearing’s lives turn upside down when their father loses everything in a railroad land speculation. The siblings are shipped off to their mother’s brother in England with one edict: marry money.

At twenty-seven years old, Kate has the stigma of being passed over by eligible men many times—and that was before she had no dowry. Christopher would like nothing better than to make his own way in the world; and with a law degree and expertise in the burgeoning railroad industry, he was primed to do just that—in America.

Though their uncle tries to ensure Kate and Christopher find matrimonial prospects only among the highest echelon of British society, their attentions stray to a gardener and a governess.

While Christopher has options that would enable him to lay his affections where he chooses, he cannot let the burden of their family’s finances crush his sister. Trying to push her feelings for the handsome—but not wealthy— gardener aside, Kate’s prospects brighten when a wealthy viscount shows interest in her. But is marrying for the financial security of her family the right thing to do, when her heart is telling her she’s making a mistake? 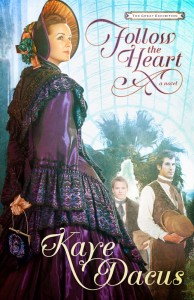 Kaye was kind enough to answer a few questions about the book (the first in The Great Exhibition Series). So here you go:

Where did the idea come from for Follow the Heart?
In 2001, I watched Victoria & Albert on A&E and fell in love with the love story of these two monarchs of England. But that wasn’t the only thing I took away from it. I was also fascinated by the scenes which portrayed the planning and opening of Prince Albert’s Great Exhibition in 1851. Then, a few years later, I watched another mini-series: North & South. No, not the one about the American Civil War, the one based on the classic, but little-known, novel by Elizabeth Gaskell. It also has a scene that takes place at the Great Exhibition. Once I saw that, I was hooked—on the era and on the event.

How did you choose your characters’ names?
Funny story . . . Kate’s name was originally Meg and her maid’s name was Joan. [This is Liz: I read that one, too!] Until I picked up a book by a writer friend and discovered those two names (as heroine and her maid, no less!) on the first page. So I went back to my original story idea and the images of the actress who’s the template for the character.  And almost as soon as I did, I heard her voice very distinctly in my head: My name is KATE. But rich men don’t marry Kates. They marry Katharines. So I changed her name and nickname to Katharine/Kate (Katharine spelled with an A in the middle in honor of my favorite actress Katharine Hepburn.) Andrew is a name I’ve always loved and wanted to use, and it suited this landscape architect perfectly.

Why did you choose to set the story in Oxford, instead of London where the Great Exhibition was held?
I read at least three or four British-set historical romances each month—and without fail, the majority of them are set in London. It’s a setting that has become over-exposed. Also, with a landscape architect as my main hero, I needed the action to take place at a country house, not in the city. By the 1850s, Oxford was a large enough city to have railway service to all of the other major cities, but still quaint/small enough to give the small-town feel that I love to use in my stories. Plus, there was a lot of chaos happening in London in early 1851 due to the final preparations for the Great Exhibition, and I felt like that could overwhelm what I wanted my story and settings to be.

What was your favorite book as a child?
I loved the Little House on the Prairie books (still have the original yellow-cover copies from childhood). As a ’tween, I discovered the Sunfire YA romances, and I was hooked!

Any advice for aspiring novelists?
The best advice I got when I first started getting serious about learning the craft and pursuing publication: Above all else, FINISH YOUR FIRST DRAFT! You can fix anything but a blank page. The most important thing is to get your entire story down on paper before you start worrying about all of the technical craft things and stressing yourself out about “making it perfect.” Just write.

If you love a heartwarming regency tale, be sure to check out Kaye’s Follow the Heart–available on May 1st at bookstores everywhere including amazon, Barnes and Noble, LifeWay Christian Stores, and more!