I know it’s not Friday, but I just have to share with you all a couple videos from the good folks at the Revolve Tour. (In case you haven’t heard of it, the Revolve Tour is like the teen version of Women of Faith.)

The crack marketing staff over at Revolve, put together a 4-part video series staring Random Tyler, where he repeats things that girls have written in about Revolve events to random strangers.

Hope you got a giggle out of these, like I did. 🙂

As we’re quickly approaching Thursday and all it’s turkey-deliciousness, I wanted to take a quick moment to share a couple things that I’m really thankful for.

1. A family whose love I feel so undeserving of. Really. They’re absolutely amazing! How did I ever get so lucky to be part of this crazy mob? And the kids! Their cuteness factor is absolutely off the charts!

2. I’ve never had to worry about where I’m going to sleep that night. After listening to some folks at church on Sunday share their stories of a recent mission trip an Indian reservation near Globe, AZ, I have a renewed spirit of gratitude for the simple things that I so often take for granted–like a safe, warm place to stay every night.

3. My job. While it may be trying and I may sometimes feel like I’m doomed to fail, I’m so grateful for not just steady income (which is pretty incredible as is), but getting to work in an industry that’s always been my dream. I believe that the books that I get to work on are making a difference not only in this life but also in the next.

4. My other job. Somehow God has seen fit to fulfill one of my biggest dreams and given me the opportunity to write books.

If God never gives me one more thing, I’ve already been given so much more than I deserve. And I’m going to choose an attitude of gratitude not just this time of year.

What are you choosing to be grateful for this year?

Tonight is the night. I should be going home after work, taking a nap, donning my “Jealous of Ginny” t-shirt (yes, that’s an original!), leaving the house at 6:30, and arriving at the movie theater. Then I should be waiting in line with hundreds of other rabid Potter fans.

But you what? I’m not. For the first time since the second Harry Potter movie released when I was in college, I’m not going to the midnight showing.

Instead I’m going to go home after work today. Then … who are we kidding? I’ll probably take a nap because I’m just not as young as I used to be. And then I’m going to meet up with my friends, and we’ll be off to the Ryman Auditorium to see Needtobreathe.

If you’ve missed my recent love for Needtobreathe, I’ll spare you all the details and just say that I love their newest album The Outsiders so much that I listened to it pretty much nonstop while writing my third book.

This concert may be the only one of theirs that I ever get to go to–especially at the Ryman, so it was an easy decision to forego Harry. At least until today … when I’m just a little bit sad that I’ll be missing out on the Potter-mania.

Have you seen the new commercials for Allstate car insurance? Mayhem is played by this guy in all these differenct scenarios. He’s a tree branch dropping on a car during a storm. He’s a jogger distracting a driver.

And in this one, he’s a teenage girl. Love this commercial. (However, I have no experience with the car insurance.)

If you’ve read my newest book, Vanishing Act, you’ve met Nate Andersen, FBI hero extraordinaire. Nate is just the right amount of tough guy and sensitive spirit. In fact, it’s his sensitive side that makes him decide not to pursue Danielle Keating because he feels sure that he’ll break her heart. He’s certain that he’ll repeat past mistakes and continue a legacy he’d rather forget.

And while that wasn’t always part of Nate’s story and developed as I explored the story, there is one thing about Nate that never changed. His face.

From the moment I met Nate as I was writing The Kidnapping of Kenzie Thorn, I knew that Nate looked just like my favorite musician. Brandon Heath.

And this week, I got to meet Nate’s real life counterpart. Brandon was playing at the Bluebird in Nashville, and my sweet friend Katie got us reservations to see the awesome show. The Bluebird holds about 75 people, so after the show I found my way over to Brandon, gave him a signed copy of Vanishing Act, and got him to sign a copy of VA back to me! And get this … he said his mom named him after the hero in a romance novel! I love it!

So what was it like to meet kind-of-Nate in real life? Two words. AWE. SOME.

Brandon was excellent! Super-genuine and just so kind. In such an intimate venue, his amazing talent was even more evident than usual. He’ll be a favorite of mine for ages! And not just because he seemed genuinely honored to be the face of my hero. 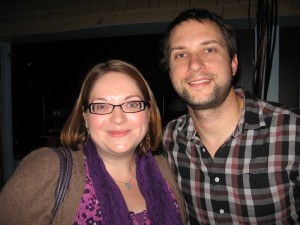 Do you twitter? If you do, then you’ve likely encountered the fail whale. 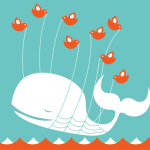 The fail whale is a symbol known round the world. It means twitter is over-extended and can’t possibly handle one more tweet–yours. It means the whole site has shut down. At least to you.

I tell you this first, to explain to you why I’ve experience my own personal fail whale. In case you haven’t noticed, my website has been inaccessible for the better part of a week. Yup. Clean shut down.

Turns out that more than a year ago I posted a certain picture on my blog. And last week the site from which I borrowed said picture decided it wasn’t okay for me to be using it. (Let this be a lesson to you, kids. Don’t borrow anything that isn’t up for being borrowed.) So they sent a letter to the server for my website, telling us to remove the picture or shut the site down.

Well, we didn’t get the letter until about 3 days later. By which time my site had already been shut down.

We finally got in touch with the right folks, took the picture down, and all is good to go. So we’re back. (You couldn’t get rid of me that easily!)

So the picture that made my whole site fail? A famous killer whale.