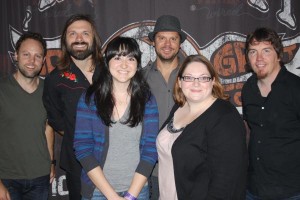 I LOVE going to concerts. Especially when I love the groups performing. Enter Revive, Brandon Heath, and Third Day!

So last Thursday my mom and I took off for Phoenix to see these guys perform at the Celebrity Theater, one of the coolest venues ever. The stage is in the middle of the room and the seats go all the way around. And the stage spins. Check it out in this clip.

So as if the venue isn’t cool enough, we were sitting in the 3rd row. Literally 10 feet from the groups as they performed. The theater tauts itself as the most intimate theater experience in the valley (Phoenix), and it totally is! I got some great pictures and loved being so close even when we were looking at the “back” of the stage.

So I have to tell you a funny story … my mom isn’t what you’d call a big concert goer. She’s more of a praise and worship kind of gal than a rockin’ Christian music chica. But she agreed to go to the concert with me so we could get some quality bonding time together. When I first bought the tickets, she was talking to a younger guy in her Bible study and said we were going to see Three Days in concert. At first he didn’t understand, then he made the connection. We were going to see Third Day, and he was totally jealous. That made my mom smile. 🙂

I warned mom that she might want to get some ear plugs. But she didn’t bring any. The show was LOUD, but amazingly wonderful. Here’s a snippet from the actual show that we were at.

And of course, my main reason for going was actually Brandon Heath. Nothing surprising there. Except that he was more wonderful than I even hoped he’d be! And I know Amy is going to ask about Joe. He was fantastic too! 🙂 Here’s a clip from the show of Brandon.

Brandon closed out his set with a song called Soldier. I’d never heard it before, and it was really great! Here’s a clip of him singing it several years back. I’m pretty sure it was on one of his first independent albums. I’m hoping I can find it on iTunes or something because I need it on my iPod.

So I really love concerts. I love the noise and the excitement in the air. The freedom to dance like a crazy woman and have no one think any the less of me. The fun of hooting and hollering after my favorite songs and at my favorite performers. But most of all, I love how God always unexpectedly gets a hold of me.

Take for example this show. There a was a young man with Down’s syndrome just a few seats over from me who quite verbally expressed his disinterest in Brandon. He was there to see Third Day and just wanted them to perform. I on the other hand really wanted to see and enjoy Brandon. I found myself getting irked that he was stealing a bit of my enjoyment of the show and irked at his dad who was with him for not quieting him. And then Brandon began “Give Me Your Eyes” and my heart squeezed. I’d been doing a terrible job of seeing this young man through God’s eyes. I needed to have love and concern for my neighbors. My heart softened and I found myself enjoying the show even more.

I love it when God does stuff like that.

Anyway, here are a few more pics that I took at the meet and greet and during the show. Hope you enjoy. 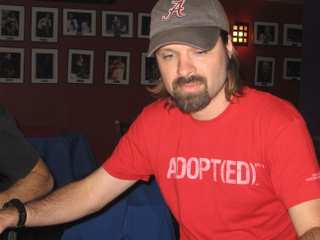 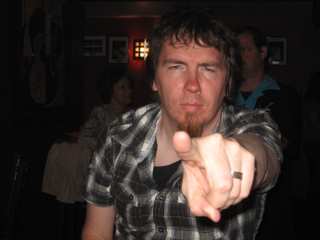 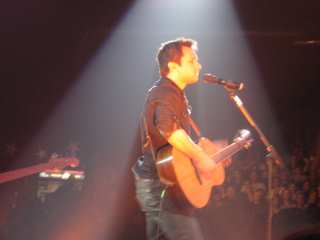 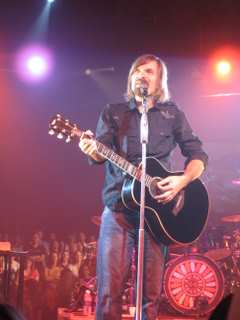 Still hoping to meet Brandon until next time. -LJ

So I decided to take the plunge, spend some Christmas money and make the trip back to AZ for the Third Day and Brandon Heath Revelation tour. Tickets are purchased (Mom and I are sitting in the third row!) and I’m stoked to get to hang with the family for an entire week. I should be to AZ just in time to miss having to help move Micah and Beth and Hannah and John into their new homes! Perfect timing! 🙂

So my mom agreed to go to the show with me not because she’s big into concerts or especially loves either Brandon or Third Day, but rather because she loves me and wants to hang out with me. Very cool. 🙂 But being a seasoned concert veteran, I know that a show is always better when you know the songs, so I put together 2 cds for her and mailed them off this week. They are labeled:
Operation: Get Ready for the Concert – Part 1: Brandon Heath
Operation: Get Ready for the Concert – Part 2: Third Day

Here’s hoping Mom actually listens to them so she’s ready for the show!

In honor of Third Day’s new album Revelation (which I’ve been rocking out to in my car, on my ipod at work, and at the gym), a video that I think sums it up better than I ever could.

Until we’re rocking out live at the concert. -LJ

So I’ve come to a quandry. As we all know by now, Brandon Heath is one of my favorites. And Third Day is also near the top of my list. (Hmmm … I should nominate them for a Friday Favorite slot.) I’ve had the opportunity to see both Brandon and Third Day in concert on seperate occassions this past year. Both were delightful shows.

Imagine my delight when I learned that they’re going on tour together this spring for the Revelation Tour. What could be better? I scurried to see the tour schedule to see when they’d be arriving in Colorado. But with each date in the list, my heart sank a little lower. Each date a disappointment. The east coast. The Midwest. Texas. California. Canada.

No Colorado. Not even a date in New Mexico.

But there … off in the distance … a glimmer of hope. The tour is coming to Phoenix, Arizona, a mere 15 hour drive. To the little Celebrity Theater with the spinning stage. The site of my first post-college concert–Chris Tomlin and Louie Giglio.

Okay, so I wouldn’t really drive it, but I have been seriously thinking about flying down for a long weekend and spending a couple days with my family, who live only about a 3 hour drive away. But is it worth it? To plop down $175 for a plane ticket and another $35ish for a concert ticket?

My mom laughed at me when I suggested it. But I haven’t written off the idea yet.

Want to weigh in on if I should make the plunge and go see the show? Leave me a comment. -LJ