Skip to content
If you’ve been curious where I’ve been the last 2 weeks, well … you’re not alone. I’ve been running around, feeling like a chicken with my head cut off. Really it all started on Friday, August 27 when I flew back from a work trip to San Antonio and picked my mom up at the airport less than 2 hours after my own plane landed. We filled that weekend with exploring the history of the Battle of Franklin (pictures and such to come), hitting a few hotspots in Nashville (can you say Pancake Pantry?), and packing for our trip to Prince Edward Island.

So I thought I’d offer a day-by-day survey of our trip to PEI along with enough pictures to make you put it on your “must visit” list.

Tuesday, August 31 –
3:25am comes awfully early for this night owl. But our flight left Nashville at 6:05am, so there was no way to get around it. I think I was still half asleep as I drove us to the airport, but by the time we were unloading our bags and climbing onto the shuttle bus from the parking lot to the terminal, my blood was really pumping. Boy was I getting excited!

We boarded our plane and slept–using our very handy, brand new neck pillows–nearly all the way to Newark, NJ, where we had a short layover and were quickly back in the air. As we took off and looped over the New York harbor, Mom and I both had our first view of the Statue of Liberty. And while I’d been to New York City once before, neither of us had ever seen the New York skyline like that. It was an incredible view.

When we landed in Montreal, we were both tired and perhaps a little grumpy, as we followed the signs that read “Connections” for what felt like hours. And then we arrived at customs–a long line with a grand total of one window open at the end. It took forever, and just as we got closer they opened a second window, but it just moved slowly. When I finally got up to the little window, the lady in the blue uniform looked at my passport, asked what I was doing in Canada and sent me on my way. Without stamping my passport. All that waiting, and I didn’t even get a stamp. 🙁

As we waited in the terminal for our little tiny plane that would take us to Charlottetown, PEI, the airline personnel commented about how it was so hot outside that the tarmack would melt the wheelchair wheels. When it was our turn, we walked outside and sighed. It was gorgeous.

My leg wouldn’t stop bouncing the entire hour and 10 minute flight from Montreal. I was almost there. Almost to Anne’s land. I’d been waiting for this for years, probably since I was first introduced to Gilbert Blythe when I was 9.

And then we were there. A large sign on the itty bitty airport welcomed us to Prince Edward Island. But I barely noticed it. I was consumed with the field of cows just a few hundred yards from the tarmack. What a greeting they were!

When we stepped into the airport building, we were welcomed by yet another cow. This one, a life-size replica advertising Cows Ice Cream–apparently the best on the Island.

After picking up our rental car–a gray Toyota Matrix–we zipped along toward the bed and breakfast that would be our home base for the next 5 nights, Charlotte’s Rose Inn.

Our host John met us at the door and took us all the way to third floor, where he showed us around our own loft, a 2-bedroom apartment complete with a kitchen and living room. Then he gave us a map and suggested some places for dinner. While it was almost 6pm there in PEI (on Atlantic Time), it was still 4pm in Nashville. But we really hadn’t eaten anything substantial all day, so after unpacking a bit, we took off for Victoria Row and Queen Street, just a few block from CRI. 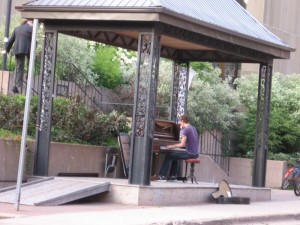 When we walked past Cafe Diem, Mom stopped because it smelled so good, and I agreed because of the live piano player right across the street. We shared some pasta, and talked about what we should do the next day. We were also right next to the Anne of Green Gables Store, which had an advertisement for Anne and Gilbert: The Musical. I knew we’d missed the summer run of Anne of Green Gables: The Musical, but I’d never heard of Anne and Gilbert. We decided to check it out online.

We walked up and down a few of streets of historical Charlottetown, passing shops and pubs and deciding that we’d need to spend more time walking around the area. We couldn’t really see the Charlottetown Harbor and we couldn’t smell the seawater (which I assumed we would be able to, given my experience with California shores), but the breeze was nice.

By the time 8pm rolled around we were wiped out after such an early morning and travelling all day. So we headed back to CRI and watched a movie before going to bed early. The next day we were off to Anne’s Land. I wanted to be rested for that!