This weekend I watched the documentary Expelled with my roommate Leslie and her fiance. We were all doing crafty things … Leslie and Rob were working on wedding invitations, and I was working on a cross stitch. I was expecting something a little lighter, a little fun for my Saturday afternoon. Instead Ben Stein presented a very thought-provoking look not at creationism vs. evolution, but rather at the lack of freedom within the scientific community here in America to consider anything other than the traditionally accepted Darwinian approach to the origins of life. 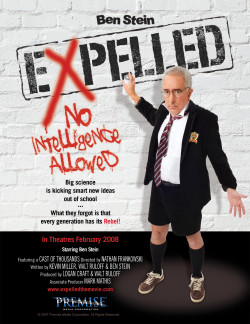 I think that I thought this movie was going to be all about creationism–which, for the record, I’m a total fan of and believe wholeheartedly in–but instead it was more about the need for a scientific arena where differing theories can be debated and argued with professionalism and respect. I agree with that too. Creationism really wasn’t the argument here. Intelligent Design was. (If you’re interested in Intelligent Design, check out Louie Giglio’s Indescribable and How Great is Our God talks from the tours by the same names. Ridiculously amazing how God’s creation shouts glory to His name, even down to the proteins holding each of us together.)

Stein investigated a lot of things that I’ve thought about before. Things like the connection between believing in Darwin’s version of evolution and losing your faith–a very, very sad commentary on how people like Richard Dawkins have replaced their faith, at whatever stage it was, in God with faith in evolution. I really loved the parts of the movie where evolutionists implied that life might have started from aliens. Classic.

But then Stein traveled to Germany and looked at how Darwin’s ideas about natural selection influenced Hitler and the Nazi regime. Wow! I would never have made that connection on my own, and it’s a terrible thing to think that a man would try to “cleanse” the world of an entire ethnic group because of another man’s ideas about mutating/morphing species.

I’d say that we need more documentaries like this. People who are challenging the Hollywood status quo, not reinforcing it. My hat is off–well, it would be if I had one, but I don’t where them because they make me look stupid–to Mr. Stein for a thoughtful and interesting film.

Thanks to Leslie and Rob for letting me crash their party and watch with them! Until next time. -LJ