More reviews of TKOKT. (I just realized the initials of my book are a palindrome.  Yay for silly things like that!) A couple reviews, a couple interviews, and a few nice words. Thought you might like to know what people are saying.

Blogger Reviews:
All4Boys
A Book Lover Forever
Novelized
And Then I Woke Up
Jessy Ferguson
On the Write Path
ElCloud
Paradoxology

So today, I want to offer you a bit of a Teaser Tuesday of sorts. I’ve been reading a book that I can never remember the name of. I just call it the Potato Peel book. If you’ve read it, then you know what I’m talking about. But if you haven’t read it and you aren’t familiar with The Guernsey Literary and Potato Peel Pie Soceity by Mary Ann Shafer and Annie Barrows, you’re missing out. I’m 20 pages in, and I love it! It’s absolutely delightful.

For the first time in my life, I wish I’d never used the word delightful to describe anything else. I wish I could have saved it for this very book.

So today’s teaser is three-fold. First the quote from pg. 10, ” Perhaps there is some secret sort of homing instinct in books that brings them to their perfect readers. How delightful if that were true.”

Second, the challenge: Leave a comment to this post with the title of the book that you think might have a secret homing instinct to find you. (Today mine is the Potato Peel book. I had no idea I needed to be reminded of the delights of being a writer–even one in the middle of terrible revisions–until I started reading it.)

Third, I’ll pick one commenter at random on July 14, and that person will win a copy of the paperback edition of the Potato Peel book. Dreaming of our fair heroine Juliet and the guy she ends up with … whoever that is … until next time. -LJ

Movie segment, I thought I’d treat you to a little interview with my good friend and fellow Steeple Hill author Betsy St. Amant.

Welcome, Betsy. We’ve known each other for several years now. One of my favorite memories is when Perfecting Kate by Tamara Leigh came out with your endorsement on the front cover. Tell everyone about that moment.
Liz, that’s one of my favorite memories of us too! I was so excited when you asked me to endorse the book, and then thrilled beyond belief when it came out on the front cover. Definitely an exciting moment for a pre-pubbed author. I still beam every time I see that book on the shelf and have even (yes, I admit) told strangers walking down the inspirational fiction row “that’s me!” haha. It really seemed to have gotten me more blog hits from it, too. Fun times! 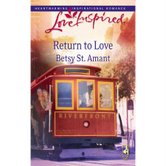 Tell us about your new book Return to Love.
Return to Love is a story about a woman named Gracie who works as the penguin keeper at the Aquarium of the Americas in New Orleans. She is planning a fundraiser gala to earn money to house penguins from a closing aquarium upstate and unfortunately, her only hope at a successful event is to hire Carter-her childhood best friend who broke her heart before making it big in the music industry. This is their story of returning to love.

Where were you/what were you doing when you got the call that Steeple Hill wanted a contract on your book?
I was actually at work when my agent, Tamela Hancock Murray, called me and I squealed so loud people came out of their offices to look. I buried my face in my hands and just kept on. My poor agent is probably deaf now. As are my coworkers.

What’s you’re favorite scene in Return to Love?
Ohhhh, let’s see, I would say the chapter where Carter takes Gracie on a walking tour of New Orleans. I love the tension between them amidst the romantic French Quarter background. Lots of culture in those scenes.

If you could “borrow” one character from a movie, TV show, or another book for your current WIP, who would it be? Why?
Oh this is hard! I would say I’d borrow Pablo (Greg Serano) from the TV show “Wildfire” (ABC family) because he’s the exact image of a secondary character in my current contracted western WIP. Maybe he’ll get a sequel one day =)

It’s Girls Night Out, and you’re next in line at karaoke. What are you going to sing?
Great question. I actually won a karaoke contest in junior high, singing with my friend Rose. This is awful to admit, but we sang “Waterfalls” by TLC. Haha! Talk about a long time ago! That bowling alley didn’t know what hit ‘em. =) I guess today I would sing a Taylor Swift song in honor of my daughter, probably the song “Love Story”. My 11 month old adores Taylor Swift. Its hilarious.

If you had a Saturday all to your self-no deadlines, no kids (they’re off with the hubby), no commitments-what’s the first thing you’d do?
Oh, I dream of this all the time so I have my answer ready! Haha! First, I’d sleep in, ridiculously late. Then I’d sit in a hot bath and read for at least an hour. Then I’d work uninterrupted on my WIP, take a nap, read some more, watch a sappy romantic comedy with lots of junk food, and then be very ready for my family to get home. I’m addicted to them =)

If you could have a role in any musical, what would it be?
Grease!!!!! Without a doubt. I’d want to be Sandy. Or Rizzo, just for the shock factor of me playing a “bad character”. Haha!

What’s one bad habit of your own that you’ll never give to one of your characters?
I have to say “never” because, well, you “never” know! =) But so far its safe to say I won’t give my love of tanning beds to my characters. Lol

Is there anything else you’d like to share?
Readers can contact me at betsystamant@yahoo.com or visit my blog at www.betsy-ann.blogspot.com or my website at www.betsystamant.com Also, if you enjoy Return to Love, be sure to look for the sequel, A Valentine’s Wish, releasing February 2010! Thanks for having me Liz, and I look forward to helping you promote your story in July as well!

Thanks for swinging by, Betsy.

Here’s a little more about Return to Love. From the back cover:
“I’m not the man I used to be!” – if only Gracie Broussard could believe that. Years ago, Carter Alexander broke her heart and betrayed her. Now, just when she needs him most, he’s back — asking her to believe he’s changed. But this time, its not just Gracie who’ll be hurt if he disappears. A penguin keeper, Gracie urgently needs to find a new home for her beloved birds. Carter is the only one who can help. He promises that she can trust him, that he’s not the rebel he once was. And that he needs Gracie as much as her birds do.

You can swing by Amazon.com, CBD.com, or Barnesandnoble.com to pick up a copy of Return to Love. Don’t miss out on this very romantic, super-fun read.

Wishing I could visit New Orleans until next time. -LJ

Starting this week, reviews should start coming in pretty regularly for The Kidnapping of Kenzie Thorn. I have 40 bloggers and over 20 websites reviewing the book and interviewing me this month. I look forward to sharing those with you. The newest is from Jennifer over at All4Boys blog. Check it out here.

Also, don’t forget to check out my brand new Appearances page. I’ll keep it updated with booksignings and events and such. Right now I have my three appearances in Yuma, AZ, July 18-26. If you’re in the area, be sure to swing by. I’d love to meet you.

Hey there! Just an update that I did an interview for another blog and thought you might like to see it. Swing by the Patterings blog here to read my interview with Patty Wysong.