I think that now is a really appropriate time to make a few confessions on my blog. First, I am a hopeless romantic! I want the guy and the girl to get together. Every time. No exceptions. Second, I am a total teeny-bopper. When I was in Jr. High, I read Bop and Tiger Beat and all those magazines for preteen girls. But while I’ve given up those particular magazines, I still love teen movies/TV shows. You name it, I’ve probably seen it. Ned’s Declassified Survival Guide is one of my all time favorite shows. And I love movies like Ice Princess (caught 2 seconds of it on TV this weekend) and Sleepover. I read YA books like they’re going out of style, and … well, you get the picture.

Sometimes I’m still shocked that I’m a “grown-up.” At least, that’s what people call me. I mean, yes, I hold down a full-time job and actually do okay at it. And, yes, I pay rent, own my own car, and even get my bills paid on time. I’m officially a published author, and I sometimes I’m surprised that I’m not 17. Am I the only one who feels that way?

Anyway, one of my favorite parts about being a teeny bopper is being able to watch really bad made for TV movies from ABC Family. This weekend’s offering was Au Pair 3: Adventure in Paradise. We first met Jenny and Oliver and Oliver’s two precocious kids back in 1999 in the first Au Pair. Jenny was mistaken as a nanny candidate for Katie and Alex, but she needed a job badly and took off around the world with the family. Oliver, a business mogul, was of course too busy for his family and to notice that his fiancee was a horrid woman. But all was well in the end and Jenny and Oliver found love together. 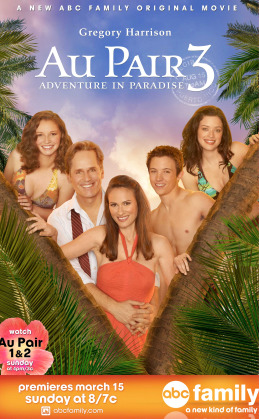 Alex is graduating from high school and Katie has just finished her freshman year in college, so Jenny and Oliver decide to take the family to Puerto Rico for a summer vacation and some much-needed family bonding. Katie’s roommate/best friend Ariana tags along. Oliver’s overly protective nature gets in the way as he has bodyguards trailing his kids every which way, which drives Katie crazy. And he fails to see that his son really wants to study art instead of business. He can’t see either that Jenny doesn’t want to work for his company any more. She wants to stay home with their young daughter Sarah and manage a charity foundation.

It was a cute movie, and I had such high hopes for it. It started off like every good teeny bopper movie should. With Alex having a crush on Ariana (who turns out to be an undercover bodyguard–very First Daughter, another of my favorites!), and Katie gets free from her trailers and meets a guy, too. All should be well, except it’s not. The whole movie focuses on the relationships, all but ignoring the business angle–will Oliver be fired by his board of directors?–until the very end. The conclusion satisfies Oliver’s business problems, and even addresses Alex going to art school and Jenny running the foundation. But it ignores the young love.

I’m not asking for wedding bells or even a kiss. But is it too much to ask for some hope? I just wanted hope for Alex (he was adorable, and, incidentally, the actor is from Colorado) and Ariana and Katie and her guy Danny. I got squat.

Bummer. Oh, well. I’ll survive, I suppose. 🙂 Waiting for the next great ABC Family flick until next time. -LJ