This weekend Amy and I drove up to Denver to visit my aunt and uncle. We’d been invited for the whole Easter weekend, but we already had plans on Easter Sunday, so we decided to enjoy just one night with them. After a lengthy round of Phase 10, a family favorite table game, we started discussing what we should do on Saturday. It was decided that shopping and a movie sounded like a good time.

The problem was that there aren’t very many interesting movies out right now that I really want to see. I’d be up for Slumdog Millionaire. My aunt’s already seen it. Amy was up for Duplicity. I’ve seen it. It went like that for a couple rounds until we finally landed on Inkheart, which none of us had seen. But it was only showing at one theater all the way on the other side of town. It was a place called Cinema Grill.

If you’re thinking this sounds an awful lot like a restaurant and a movie theater you’d be right!

So it turned out that the theater was showing mostly movies that had been out for a while, and tickets were only $2.50 each. Kind of like our dollar theater here in town.

But instead of having normal theater seating, there were tables and counters where we sat in comfy swivel chairs. We ordered food from the menu (it was pretty typical American style food) and they brought it to us while we watched the movie. It was a amazing! I’ve never even heard of a place like that. It was a dinner theater for lunch at the movies.

While I’m usually easily distracted and I did notice the servers wandering through the theater, it didn’t really bother me. Maybe it was the novelty of it all, but I had a blast. What a unique idea. 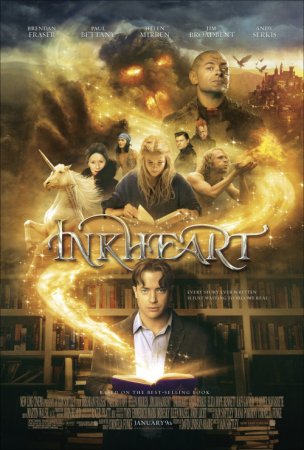 I confess that the movie was completely secondary to the entire experience, but I did enjoy it a lot. Based on the the book, Inkheart stars Brendan Fraser as Mo, who has the ability to read characters from books into reality. But when a character is brought to life, someone from reality has to go into the book. That’s how Mo lost his wife nines years before.

He’s been looking for a copy of the incredbily rare Inkheart for just as long, hoping to read her back into reality.  But when he finally finds it, he and his daughter are plunged into an adventure that could only come from the pages of a book.

It’s quite an imaginative story, and I definitely enjoyed it. I’ve heard that the movie is actually better than the books (which is so rare), but I haven’t read them myself yet. It was a blast eating my chicken fingers, fries, and sundae while watching a movie on the big screen. Quite a great weekend!

Thinking about opening up my own Cinema Grill until next time. -LJ

One thought on “Monday Movie – Inkheart”