Okay, so I know … it’s been FOREVER since I posted a Monday Movie. But it’s not my fault. Okay. Okay. It’s completely my fault. But I do have a good reason. I haven’t had time to actually watch a movie in quite a few weeks. Lame. I know. But what’s a girl to do? First there was moving across the country, then the actual moving in thing. Then there’s this whole deadline thingy for my next book, starting a new job, and trying to help out with flood relief.

Excuses? Totally. But I hope they’re valid enough for you. So … I’m sorry. I’ll try not to let it happen again. For a while.

On with the review!

On Sunday afternoon I went to see my first movie since moving to Nashville (unless you count How to Train Your Dragon with my dad several weeks ago, but I didn’t really consider myself officially living here yet). First, let me just say that I was checking out a pretty new theater a few miles from my house. It was a wet and rainy day, so after church I figured it was a great day to be indoors.

The theater wasn’t very busy, when I got there at noon, and I realized why as soon as I got up to the ticket window. My earliest matinee price? $7.50!!!!!!!!!!! What? The Cinemark Theaters back in Colorado Springs had matinees for $6.75 and the earliest show of the day for most movies was only $5.50 or something wonderful like that. When did tickets become to expensive? I mean, we all know they make their real money at the consession stand, so why not give us a break at ticket window?

But I digress. I paid all that money and even made a trip to the snack bar for a little popcorn, which I ate for lunch even though it was a tad on the burnt side. And I drank a medium soda … which was a bad idea about 3/4 of the way through the movie.

Anyway, so I’m in the pretty swanky, nearly empty theater with a rocking seat (no, literally it rocked). The previews were pretty lame, but I was getting really psyched. I’d been waiting for Letters to Juliet to come out since I first saw the preview months ago. It’s very clear from just the preview, that this is a classic chick flick, and it didn’t disappoint. 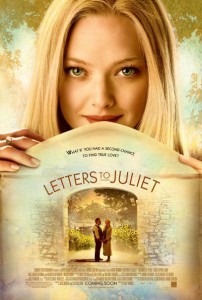 Sophie is a fact-checker/would-be writer for the New Yorker magazine who goes on vacation to Italy with her fiance Victor. He’s there to meet with suppliers for his new restaurant. She’s there to sight see and spend time together. So when Victor leaves for a wine auction, Sophie explores the city of Verona, where Romeo and Juliet first met.

At Juliet’s house there is a wall where women write letters to the heroine asking for advice. And every evening Juliet’s Secretaries pick up all the letters and reply to them. These women befriend Sophie, and she joins them for a short time, one day finding a 50-year-old letter from Claire, who did not meet her beau Lorenzo when they were supposed to run off together. Of course, Sophie takes it upon herself to reply to Claire.

Less than a week later, Claire’s grandson Charlie arrives at the office of Juliet’s Secretaries and yells at Sophie for replying to his grandmother, who has, of course, insisted on returning to Italy to find her true love Lorenzo Bartolini, which turns out to be a very common name. Claire agrees to let Sophie join them on the hunt for the right Lorenzo, much to Charlie’s dismay, and they begin a beautiful tour through Italian wine country. 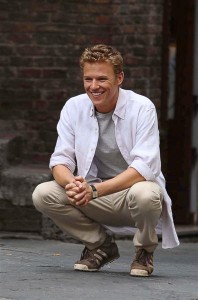 While I anticipated Charlie and Sophie’s initial dislike of each other, I was completely unprepared for Charlie’s (played by relative newcomer and Australian Christopher Egan) funny one-liners and subtle charm. In him we find a character that is a stereotypically cold Brit who is uncommonly passionate about protecting his grandmother, who has lost not only her husband but also her son and daughter-in-law. If you can get past his unusual ambling gate, I think you’ll fall for him, too!

Charlie and Sophie’s relationship changes from hate to indifference to attraction at the perfect pace. But we can’t forget about Victor, the fiance consumed with his own needs. He throws a wrench into Sophie and Charlie’s lives, but adds the perfect drama for the movie.

This one doesn’t break any molds, but it certainly made me laugh more than I expected for a drama. And it left me feeling warm and fuzzy. Just what I needed before heading back out into the drizzling rain.