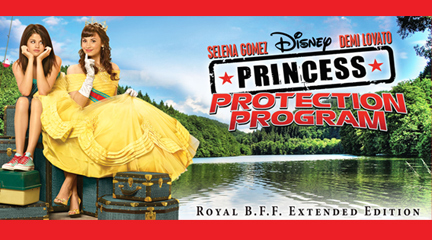 After last year’s debacle that was Camp Rock … wait. Let me back up just a little bit more.

I love teen movies–as witnessed by my blog about the Au Pair 3. So after enjoying High School Musical, I thought I’d try Camp Rock last summer. Oh, it was bad. Not good. Amy and I just cringed the whole time we watched it.

So imagine my hesitation when I saw that Disney was doing another made for TV movie–Princess Protection Program–starring Demi Lavato, who was also in Camp Rock. But I’m all about giving a second, so I thought I’d take a chance.

Turns out it was a cute movie. No earth-shattering revelations, but the acting was 300% better than Camp Rock. It was a cute movie about friendship and worth a watch with the family. My favorite part was the compltely over the top general trying to take over a country no one has ever heard of. Awesome!

Thinking that teeny bopper movies should air on ABC Family and Disney every weekend until next time. -LJ