This weekend Amy came out to Nashville for a visit–well, actually she was in town for work and extended her stay so that we could hang out. Our Saturday started with a trip to The Pancake Pantry (we couldn’t pass up the really, really good stuff!) and then we were off to the mall. We hit some great stores and then it was off to the movies! 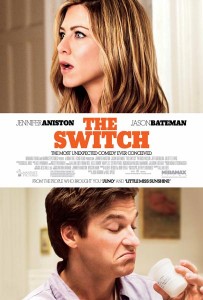 After considering a few options, we landed on seeing The Switch, starring Jennifer Aniston and Jason Bateman. A quick overview … Jen’s character Kassie decides she’s not getting any younger and it’s time to have a baby. Except there’s no guy in the picture, except her neurotic best friend Wally (played by Bateman). She turns to Roland, a donor looking to make a little money to support him and his wife. But at an … and this was really weird … pregnancy party, Wally gets drunk and makes a switch. Kassie gets pregnant and moves back to Minnesota to be near her parents. Seven years later, Kassie returns to New York City with her son Sebastian (played by the cutest kid, ever!), a six-year-old version of Wally.

I confess that I thought this movie had a bit of a rocky start with a few scenes that I could have done without. But the story is set up well, despite a snippet of unnecessary nudity and a couple crude jokes in relation to Kassie’s pregnancy.

For me, the story really took off when Kassie returned and Wally, begins to become a man who wants to deserve the love of his child–even if he hasn’t been able to tell Kassie that he’s the father. As the bond between Wally and Sebastian grows through surprising circumstances, my heart just melted. And when Sebatsian told Wally that he just wanted Wally to be proud of him, my heart broke and I nearly cried. I loved, loved, LOVED their relationship, and the bond that was there before they even knew Wally was the father.

Tack on Wally’s friend Leonard, played by the brilliant and oh-so-funny Jeff Goldblum, and the humor in the second half of the movie really shined. I did love it when Wally and Leonard were on the treadmill at the gym, and Wally was running while Leonard was walking … and eating a candy bar. That’s my kind of exercise.

I really enjoyed this movie. But I walked away thinking about the media buzz going on with Jen Aniston’s comments about single parenthood. She’s been very outspoken about her right and ability to be a single parent, if she chooses. Of course, this media hubbub stems from her character’s single motherhood. And I find it really ironic, because The Switch really is a love story between a father and a son and the importance of that father in his son’s life. Dads are important. So are moms. And I’m thankful for mine. 🙂

2 thoughts on “Monday Movie – The Switch”