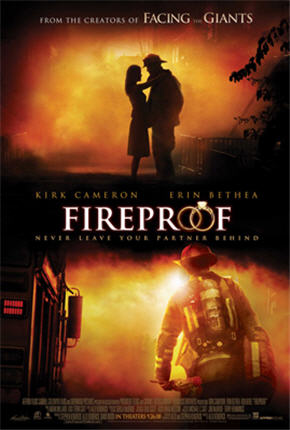 So this week I’ve decided to feature a fantastic movie that I didn’t see this weekend. Instead I’m featuring a movie that will be available on dvd tomorrow.

From Sherwood Baptist Church, the creators of Facing the Giants and Flywheel, comes a story of a marriage on the rocks, a man who doesn’t know what it is to love, and a woman who’s given up hope. And encompassing it all is a story of God’s restoring love.

Kirk Cameron stars as Caleb Holt, a fire captain, whose motto is “never leave your partner behind.” He receives the respect of the men at his station and everyone in town, except his wife Catherine. Their home is a battlefield over money, jobs, and housework, and Catherine wonders when she stopped being “good enough” for her husband.

And then Caleb’s dad challenges him to take the Love Dare, a 40-day daily choice to act in love toward Catherine. At first Caleb is hesitant, only doing the bare minimum and barely biting his tongue when angry words jump to mind. And when he’s met by Catherine’s skepticism and cold shoulder, he longs to give up on the Love Dare and on his marriage. But the more frustrated he becomes, the more his father prays for him and encourages Caleb to keep to keep at.

This movie is a beautiful illustration of God’s continuing love for us, even when we turn our backs on Him and refuse to receive His love.

As a big fan of Facing the Giants, I was thrilled to go see this movie in the theater during its opening weekend, and I wasn’t disappointed. The production, acting, and story quality from the Kendrick brothers’ films just continue getting better and better.

I saw this twice in the theater and will definitely get it on dvd. It’s a fantastic film, and I highly recommend it. I eagerly await the next movie from Sherwood Baptist. Until next time. -LJ