I’m so sorry to anyone that’s been around me this last week! If you’ve been following my tweets, you know that I’ve been enjoying the soundtrack to the recent movie version of Phantom of the Opera. If you’ve seen me at the gym, you’ve probably been wondering who that crazy girl lip synching to her ipod is. If you’ve had the bad fortune to cross my path in person in recent days, you know that I’ve been singing (quite badly) out loud the three lines of Phantom that I can remember every minute of the day.

And so, in the hopes that I might appease those that I’ve offended with my terrible voice … I offer Gerard Butler singing The Music of the Night.

I just LOVE his voice in this role! And he’s a pretty funny guy too in all the interviews I’ve seen of his! I’m a big-time fan. He’s just a really fantastic actor–and he’s got a Scottish accent to boot. I loved him in Nim’s Island, P.S. I Love You, and, of course, Phantom. If you don’t recognize him behind the mask, here’s another pic of Gerry that might help you place his face. 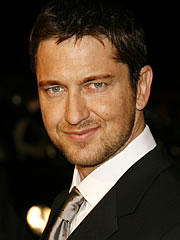 P.S. A little shout out to Amy, who said she likes “the song on the rooftop.”