Four weeks into my countdown of favorite Made for TV Christmas movies (my dad left a comment calling them mftvcm–I’m so proud!) and we’ve reached one that my mom and I both love watching together. 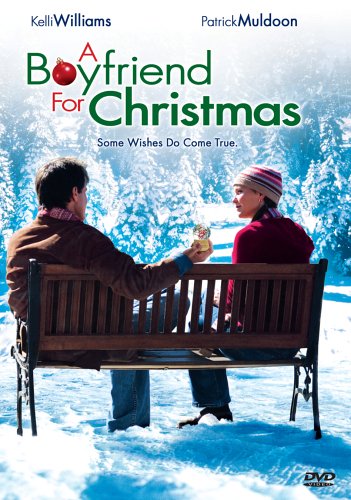 Enter good old Saint Nick, who sends Ryan on a little mission–to give Holly the best gift ever. But when he shows up at Holly’s house with a beautiful tree, he realizes who she is so introduces himself as Douglas Firwood. In the days leading up to Christmas Holly finds herself falling for the kind and mysterious Douglas. That is until her sister in law surprises their whole family by inviting Ted–Holly’s old boyfriend and the key to Holly’s brother’s professional success.

Will Holly fall for an old boyfriend or the man who deceived her? And will she find a boyfriend for Christmas?

I think it’s pretty clear why I love this movie! 🙂 There’s romance. There’s humor. There’s a very handsome man. There’s a completely implausible storyline. Like I said, what’s not to love?

If you haven’t seen this favorite, watch your TV listings, or pick up the movie for sale at Amazon or Walmart. It’s totally worth a watch with your family and friends.

Katie’s 2 cents: Love, love, love this MFTVCM. I definitely think it’s one of the better ones out there. Here’s what I love about it: awesome 80s flashback complete with side ponytails and scrunchies, Jeff from the Max as Doug slash Ryan, and a love that is DESTINED to be. Holly is a likeable leading lady – just a normal, successful, not desperate, not annoying girl you can really root for. And here’s what I envy about her – she asks for a boyfriend, Santa sends her a boyfriend, one just shows up on her doorstep complete with a big red bow. Now there’s a system I can get behind – are you with me? (granted she has to wait 20 years but that’s just a minor detail…). Plus I feel like even though the movie spans Cmas to NYs, there’s a nice natural progression for Holly & Doug slash Ryan getting to know each other and the fact that they fall in love in a short period of time is totally acceptable because they are DESTINED. Like Santa says, when 2 hearts are ready…