My name is Michael Weston.  I used to be a spy until … when you’re burned 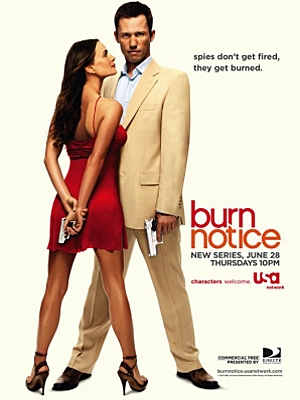 you’ve got nothing. No cash. No credit. No job history. You’re stuck in whatever city they decide to dump you in. You do whatever work comes your way. You rely on anyone who’s still talking to you. A trigger-happy ex-girlfriend. (“Should we shoot them?”) An old friend, who used to inform on you to the FBI. Family too. If you’re desperate. Bottom line … until you figure out who burned you, you’re not going anywhere.

Thus begins every episode of Burn Notice, which–you guessed it–is about a spy who is burned. But he’s not just any spy. Michael Weston (played by Jeffrey Donovan) is thespy. He’s like MacGyver, only with bombs and guns and tracking down bad guys. Wait. That is totally like MacGyver. Okay … I got it … Michael is like MacGyver, only really cool! And modern–like making cell phones work even when there’s a signal blocker.

Michael’s tips and tools of the trade between scenes are like a “how to” book for smart spys. Makes me want to be a spy. Except for the being shot at thing. But really, it’s awesome! Who knew getting lunch for an informant could get you everything you wanted?

Each episode Mike and the gang help someone in Miami who is in trouble. Single parents looking for their kids. Big brothers on the run from a gang because they were protecting family members. The combinations are endless, and Mike’s ability to solve the problems are incredible. In a hostage situation any idiot can steal a gun and start shooting. It’s a great way to get a bunch of innocent people killed. Keeping people alive, means fighting like a spy.

One of my favorite things about this show is the supporting characters. Fiona, played by Gabrielle Anwar, who all you girls out there will remember from Wild Hearts Can’t Be Broken, is Michael’s arms dealing, sharp-shooting ex-girlfriend. Fi is spunky and funny, and the tension between Michael and her is almost enough to set my 6-year-old TV on fire … in a good way. 🙂

Sam, a former Navy SEAL, is Mike’s side-kick and the truest kind of friend. He literally has put his life at stake to keep Mike and Fi safe. And the bickering between Sam and Fi is generally laugh-out-loud funny.

Life with a hypocondriach mother gives you a useful knowledge of pharmacuticals.

Mike’s mom Madeline is forever asking him to go to family therapy, help his brother, or help one of her random neighbors. She doesn’t understand what Mike does, but she does know he’s a good man.

One of my favorite quirks in the show is Mike’s penchant for yogurt. Every episode, he’s spooning the good stuff in. Or going to the store to buy some more.

The one-liners are brilliant, and the dialogue is super-smart. If you haven’t seen this show yet, meander over to USA Network or pick up seasons 1 and 2, now available on dvd. This show absolutely rocks!

Thinking about a career as a spy until next time. I’d be an awesome spy! -LJ