I thought it would be fun today to share an interview I did recently with Camy Tang, another Steeple Hill author.

Camy, your first books are chick lits published by Zondervan. How does writing romantic suspense for Steeple Hill differ from your previous books?
It’s actually a really big mental change for me when writing romantic suspense versus chick lit. I have to “set the stage,” so to speak-I watch a bunch of CSI TV shows, play suspenseful music, and darken my office a bit. Even then, it sometimes takes a little while to get into the mindset of writing suspense instead of humor. I love writing both, so that must mean I have multiple personalities!

Tell us a little bit about your new book Deadly Intent.
Here’s the back cover blurb:
SCENE OF THE CRIME

The Grant family’s exclusive Sonoma spa is a place for rest and relaxation-not murder! Then Naomi Grant finds her 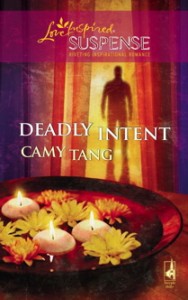 client Jessica Ortiz bleeding to death in her massage room, and everything falls apart. The salon’s reputation is at stake…and so is Naomi’s freedom when she discovers that she is one of the main suspects! Her only solace is found with the other suspect-Dr. Devon Knightley, the victim’s ex-husband. But Devon is hiding secrets of his own. When they come to light, where can Naomi turn…and whom can she trust?

Who’s your favorite character in this book? Why?
That’s like asking who’s my favorite child! I picture Alex O’Loughlin (from the canceled TV show Moonlight, who’s also got a new series coming out this year called Three Rivers) as my hero, Dr. Devon Knightley, so it was fun to picture his handsome face as I wrote his scenes!

Why did you set the book in the Sonoma Valley?
I love Sonoma! I enjoy visiting the wineries, especially with my dad when he visits me in California. I’ve seen some absolutely beautiful countryside as I drive through Sonoma and even further north toward Geyserville, and I just knew I wanted to set a story there.

Where were you/what were you doing when you got the call that Steeple Hill wanted a contract on Deadly Intent?
It wasn’t very dramatic, I was on the computer when my agent called. LOL I promptly emailed everyone I knew!

It’s Girls Night Out, and you’re next in line at karaoke. What’re you going to sing?
If I’ve had a glass of wine, you probably don’t want me to! LOL One song I really love is “Unwritten” by Natasha Bedingfield, so I’d probably sing that (http://www.youtube.com/watch?v=GGlvZ3uYRB0)

If you could “borrow” one character from a movie, TV show, or another book for your current WIP, who would it be? Why?
Actually, I already did! I love Horatio Caine from CSI:Miami because he combines his own brand of “don’t mess with me” with moments of true compassion. So I “borrowed” him for Deadly Intent as Detective Carter! I also waved Naomi’s aunt Becca at him as a love interest. 🙂 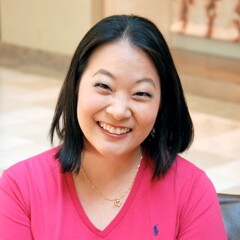 If you had a Saturday all to your self-no deadlines, no commitments, no hubby (he’s off with his friends)-what’s the first thing you’d do?
Knit! And listen to audiobooks or watch a movie. I like doing lace knitting with audiobooks because I can pay attention to the intricate charts while still enjoying a good read!

What’s one bad habit that you have that you’ll never give to one of your characters?
I’m embarrassed to admit I don’t clean my house as often as I should. Since I don’t have kids, it doesn’t get “messy,” and if it’s not obviously dirty, I just don’t think to sweep or vacuum. I think if I gave that habit to a heroine, the reader wouldn’t like her very much!

Thanks for having me here, Liz!

Thanks for joining us today!

A little more about Camy Tang:
Camy Tang writes romance with a kick of wasabi. She used to be a biologist, but now she is a staff worker for her church youth group and leads a worship team for Sunday service. She also runs the Story Sensei fiction critique service. On her blog, she gives away Christian novels every week, and she ponders frivolous things like dumb dogs (namely, hers), coffee-geek husbands (no resemblance to her own…), the writing journey, Asiana, and anything else that comes to mind. Visit her website at http://www.camytang.com/ for a huge website contest going on right now, giving away ten boxes of books and 30 copies of her latest release, DEADLY INTENT.

GIVEAWAY!!! *bells and whistles*
And Camy has graciously agreed to giveaway a copy of her book. So leave a comment here with your favorite karaoke song, and you’ll be entered to win Deadly Intent. I’ll pick a winner next Friday.

If you don’t win or just can’t wait, you can pick up a copy of Camy’s book at Amazon.com, BarnesandNoble.com, and CBD.com.

Happy reading until next time. -LJ