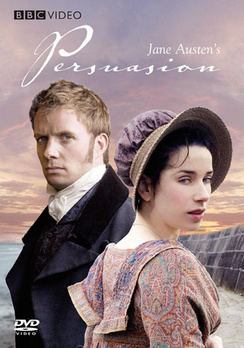 Where have I been? As a card-carrying girly-girl, who has seen multiple versions of every other Jane Austen book-turned movie, how is it possible I’ve never seen Persuasion? There are a million versions to choose from, so why haven’t I ever picked one up?

Well, I changed that this weekend, with a quick trip to the library, where I borrowed a newer version from the BBC. I think this version, staring Sally Hawkins and Rupert Penry-Jones, was part of the PBS run of Jane Austen’s stories last year.

So Katie and Stephanie and I sat down to enjoy this version on Saturday afternoon. It was overcast, and Katie and I had spent the morning shopping, so we were all feeling rather sleepy. We popped in the dvd, none of us knowing the story. I suggested we turn on the subtitles, because, let’s face it, British English isn’t anything like American English. But even with the subtitles, we all spent about the first 20 minutes not quite sure who was who and what was going on.

Were Penelope and Mrs. Clay the same person? Who was Elizabeth and how was she related to Anne Elliot (our heroine)? And was Captain Wentworth as amazingly handsome as everyone kept saying?

After several pauses and much discussion we discovered that in fact: Penelope and Mrs. Clay were indeed one in

the same … Elizabeth is Anne’s sister … and Captain Wentworth? Oh, he’s absolutely as handsome as everyone says!

What a delightful story of the constancy of love. Eight years ago, Anne Elliot broke off her understanding (aka engagement) with Lt. Frederick Wentworth, a lowly naval man with no nobility in his family. Sir Walter Elliot, Anne’s father, believes Wentworth is unworthy, and Anne’s confidant and friend believes it’s unwise to be engaged to a man with no wealth, no position, and headed off to war (still slightly unclear what war it was that he was fighting in). So Anne was persuaded to end their understanding.

Now the Elliot’s money is dwindling, and they must rent out their family home. Admiral and Mrs. Croft let the estate. But Mrs. Croft is also Wentworth’s sister. And Captain Wentworth, who received a promotion and made his fortune in the war, has come to visit.

Anne still loves Wentworth, but struggles to keep her feelings to herself, as she thinks he has fallen for her brother-in-law’s sister. Confusion ensues as Mr. Elliot, Anne’s cousin begins to pursue her, but her heart has never wavered from the man she loves.

In true Austen form, love is lost and found again, and the sweetness of this story is one to cherish. I can’t recommend it enough. With gorgeous period costumes and setting, it’s gorgeous to watch. And as I mentioned, Captain Wentworth didn’t disappoint with his brooding stares and ruffled hair. 🙂

Next time you’re looking for a really wonderful chick-flick, pick up Persuasion. You’ll love it, like I do!

Dreaming with an English accent until next time. -LJ