Saturday night Amy and I were housesitting for a friend. We thought it’d be fun to get some pizza, rent a movie, and 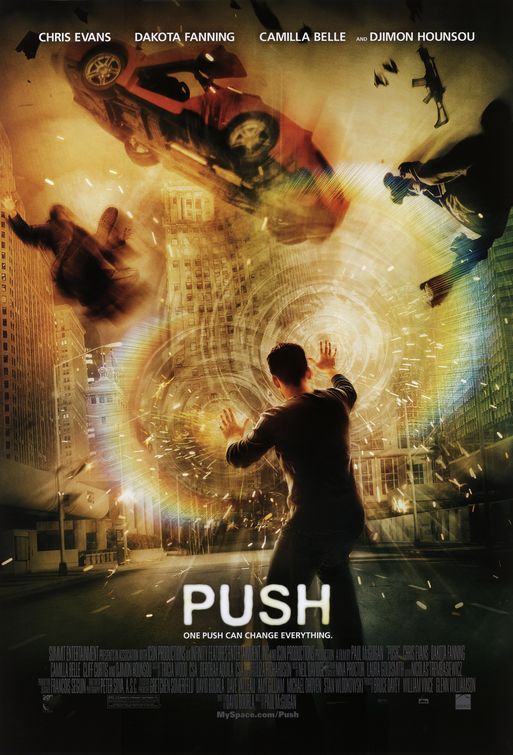 kick back with our friend’s huge flat screen TV. So we hit the redbox and picked up Push, a sci fi flick about mutant-like people who have special abilities. These people are classified by their skills. Pushers can push thoughts into other people’s minds, making them believe things that aren’t true. Movers can … well, move things with their minds. Watchers see glimpses of the future. Bleeders scream really loudly and make everything in sound reach explode. And the classifications go on.

Push centers around Nick, a second-generation mover, who isn’t actually very good at it. He gambles, throws dice, and still can’t manage to win, even though he’s supposed to be able to move the dice with his mind. Nick’s dad died 10 years before, and the last thing he said to his son was that when a girl with a flower asks for his help, he needs to help her.

Said young woman shows up in the form of a teen Dakota Fanning (who knew the girl would actually grow up to be a pretty good actress?). She plays a 13-year-old watcher, who needs Nick’s help to save her mother, who is being held by the evil Division. The only way to get her mom (also a watcher) back is by stealing a drug that Division has been testing. The same drug that is killing everyone it is tried on.

Sound conveluted? It is. Throw is extra watchers, bleeders, and pushers, and it begins to not make much sense at all.

I love those movies that make me think, that don’t  make sense until the very end. Case in point, The Prestige. I love how that movie just messes with my mind. But at the end it’s wrapped up so nicely that it all makes sense. It’s unbelievable, yet every piece of it fits so perfectly together that I don’t have to spend hours wondering what piece of the puzzle I was missing.

Push has an interesting premise, but the conclusion is so underwhelming that I just walked away feeling confused.

Worse … about half way through the movie, I thought I had figured out how Nick and Dakota’s character were connected. I was so convinced that that was how it should be that when it turned out worse than my imagined ending, I was even more let down. *shaking head* Bad move on my part.

So … I won’t be watching Push again, but that’s okay.

Looking for good movies until next time. -LJ