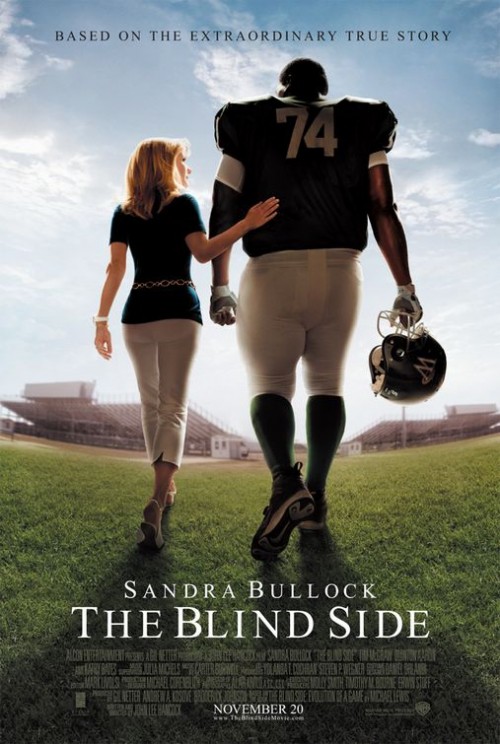 It was Friday, November 20, and Amy and our friends Johanna and Tim decided we needed to see The Blind Side on opening night. As evidenced on this very blog, I’ve been eagerly awaiting its release, so I was stoked to get to go.

We arrived about 35 minutes early with pre-purchased tickets, and it was still hard to find 4 seats together. It sold out really fast, but fortunately we got to sit together about 3 rows from the back, which was interesting because we could hear the projector … umm … projecting the whole movie. Kind of strange.

Anyway, as previously noted, The Blind Side is the story of Michael Oher, the homeless Memphis teen, and the wealthy Touhy family who took him in, gave him a home, and made him part of their family. I confess that I thought I’d cry the whole movie (I even brought a wad of tissue in my purse), but truthfully I was so engrossed in the story and the acting (you can’t help but believe Sandra Bullock as Momma Touhy) that I didn’t have time to turn on the waterworks.

A phenomonal story about loving what the New Testament calls “the least of these,” The Blind Side comes with my highest recommendation for anyone. For those who are worried that it’ll be too much about football, I read that there are only 6 minutes of football in the whole movie. It’s not a sports movie. It’s a heart movie. Take your family to see this movie, and see if you aren’t moved to reach out to those in need in your community.

As a fun side note, the following Sunday I was watching the NFL, and the Colts (my team) were playing the Ravens (the team that Michael Oher plays for). It was so cool to see number 74 Michael Oher on the field. He really is one of the best in his position. And you’ll probably have even more respect for this guy if you watch the movie. Pretty cool story.

2 thoughts on “Monday Movie – The Blind Side”