First … I’m sorry I’ve been absent, as of late. I’d like to blame it on any number of reasonable excuses, but the truth is … I’ve just been over-extended, and my blog has been neglected. It’s a good thing they don’t have a CPS for blogs, or I’d be in trouble!

Okay, on with my movie review … A while back, I reviewed The Young Victoria. You may recall that I LOVED that movie. The story of how Queen Victoria and her husband Prince Albert fell in love and ruled England together for 20 years warmed my heart and made me all swoony. 🙂

So when I heard that there was a 3-hour mini-series called Victoria & Albert, I was in! I bought it while I was still in Colorado, but it wasn’t until last week that I finally had a chance to watch it with my friend Micah. (We usually stick to Jane Austen flicks, so this was a departure for us.) Through the 3 hours, Micah was riveted.

I found it to be a slower, weaker version of the story. I kept waiting for the big 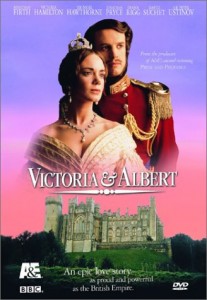 And don’t even get me started on Albert, who didn’t love Victoria at all when they got married. Nine kids later, he still didn’t love her! Seriously? I’ve heard of marriages of convenience and marriages where the love isn’t explosive. (Love Comes Softly anyone?) But according to this flick, Albert didn’t love her until nearly 15 years into their marriage. Until she said some nice things about him at The Great Exhibition of 1851. What kind of love story is that?

I did make it all the way through the movie, but it couldn’t end soon enough for me. If you want a sweet love story and historical accuracy isn’t the most important thing to you, then I’d recommend The Young Victoria instead.