I’d been looking forward to seeing Defiance all week. Jess B. and I decided to make it our last horrah–at least until she gets back from Australia in February. I don’t know what I’ll do without my writing buddy for more than 2 weeks … but that’s another story all in itself.

So Jess and I met up at the Cinemark Carefree (so I could use one of the passes I won in the Gazette Holiday Fiction Contest–more details to come on that on my Short Story page) on Sunday afternoon. Now it should be noted that I’m generally not a Sunday-afternoon movie fan, but since we were celebrating Martin Luther King Jr. and his amazing accomplishments and contributions to our country with a day off on Monday, I took the plunge for a Sunday movie. 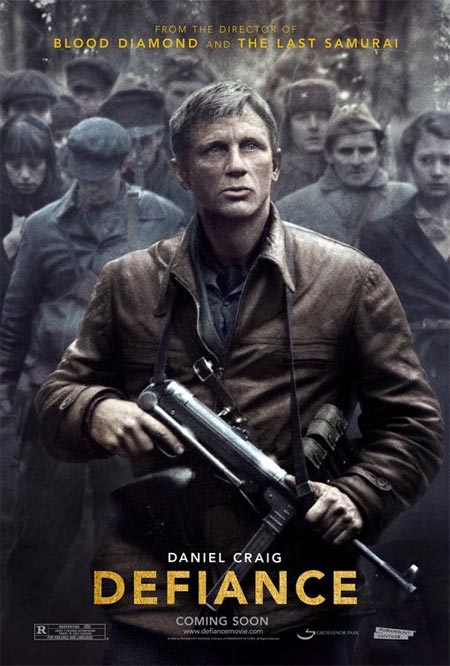 And I couldn’t have been more thrilled! This is the true story of four Jewish brothers in Eastern Europe who stand against the Nazis. In 1941 Tuvia (played by the very talented–and if I may be so bold, handsome–Daniel Craig) and his brother Zus (portrayed by Liev Schreiber) take their other brothers into the forrest to escape the SS after their parents are killed.

The story is one of compassion as the brothers tell each other they will not welcome anyone else into their community, yet at every turn, their numbers are growing, as they can’t turn anyone away. And when one of the women breaks the rule of pregnancy, Tuvia is faced with a difficult choice. Should he turn her out of the community or offer her grace?

The brothers’ story made me want to call Micah and tell him how much I love him and how proud I am of him. And at the end, I was crying, but not really out of sadness. More out of the joy of seeing such a group of people triumph in the hardest circumstances. I think I was also crying out of anger. How on earth did the world let Hitler get to that point? Why did no one stand up for Jews? And it made me ask myself some difficult questions, for which I don’t think I have an answer. What attrocities are happening now that no one is standing up against? Can one person stand up and make a difference?

I’m glad I went to see Defiance, but I must recommend it with reservations. The language is fairly coarse, especially at the beginning, and as it is a war movie, there’s quite a bit of violence. But all-in-all, I thought it was a well-told, very high quality production. I’ll probably see it again at some point down the road. -LJ