It’s pretty much a given that I’ll see at least one movie over any given weekend, so I thought I’d share my views on said films in a weekly segment I like to call Monday Movies. If I haven’t managed to catch a recent flick in the theater or on dvd, well, then you’ll be subjected to favorites from my past, likely ranging from the classic muscial Seven Brides for Seven Brothers to the more recent editions of Pride and Prejudice. But this week, I’m featuring … 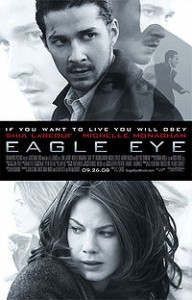 I caught this action flick, starring Shia LaBeouf and Michelle Monaghan, at the dollar theater on Saturday afternoon. Let me just begin by telling you that the cheap theater–while totally fiscally responsible–is not always the best moving-going experiece. The lines can be obnoxiously long and the seats are hugely uncomfortable, but a friend and I decided to give it a go. We were late, so the theater was dark and pretty full by the time we tried to find seats. We managed to find two on an end toward the front, my feet only sticking to the floor like it was coated with regular Elmer’s glue (not the heavy-duty stuff).

Let’s just say that by the time I squeezed into my seat, I wasn’t sure I’d made the right decision. After all, the movie is already on dvd, so I was thinking that maybe I should have just rented it.

And then it got going. From the jump, I was hooked! Its fast pace and detailed plot kept me guessing, and I confess that I really didn’t know who the bad guy was until the end. The acting was tight and the story of two strangers who are coerced into following a mysterious voice on the other end of the phone was completely far-fetched–just what I was hoping for. Shia and Michelle had great chemistry and the screenwriter had a wonderful sense of suspenseful build-up followed by a little down time for the audience to catch our breaths.

Well worth the sticky floor and itty-bitty seats. I’m so glad that I didn’t miss it on the big-screen.

Eagle Eye does have some rough language and bits of violence, so I don’t recommend it for the kids. But I sure texted my sister-in-law the minute that we got out of the show to tell her that she and my brother should rent it.

Until the next one … LJ