As promised last week, this weekend I totally went to see Leap Year, the new chick flick/romantic comedy. I went 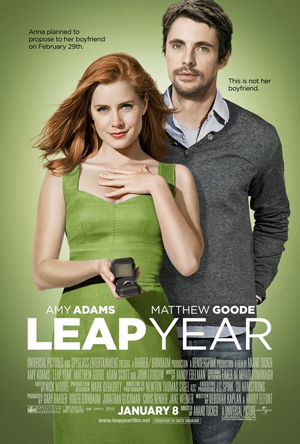 with Amy, Katie, Steph, and Jess Barnes, but before you go thinking that we all just gushed over the movie, let me say that Jess is not a fan of chick flicks. At all. And Steph? She thinks that romantic comedies are too heavy on the romance with not enough comedy.

But since this blog doesn’t belong to Steph or Jess, I’ll tell you my thoughts.

It doesn’t break any molds in the genre, but Amy Adams and Matthew Goode are delightful as Anna and Declan. Anna, an uptight real estate stager from Boston, is forced to ask Declan, a pub owner from small-town Ireland, for a ride to Dublin when the weather prevents her from getting there to propose to her boyfriend on February 29th.

Jess, who I forced to join us for the movie because she has a little (HUGE) thing for Matthew Goode, was, I think, suitably impressed with his grumpy, once heart-broken Irishman. I certainly had a thing for his scraggly beard, which isn’t usually my cup of tea. 🙂 And Amy Adams couldn’t be any cuter if she tried.

My sister was looking for a movie to see with her husband on their anniversary, and I suggested Leap Year before realizing it wouldn’t be out in time. But Hannah said she was afraid that it would turn into one of those movies where the girl is with a perfectly wonderful man, but then she meet someone else and just leaves the other guy in her dust. (Hannah’s not a fan of those flicks.) But I’m super-pleased to report that Anna’s boyfriend proves himself a most unworthy match, and I was so happy to see her leave him in the dust.

Rated PG, this is the first romantic comedy I’ve seen in years with almost no swearing, and no sex. Such a pleasure not to have to deal with those things. It’s true that the comedy isn’t as shocking as say The Proposal, but it’s sweet and oh, so enjoyable. So grab your man–or your girlfriends and catch this one soon.

Loving the goreous Irish countryside until next time.  -LJ