Wednesday, September 1 –
Breakfast at 8:45 in the main dining room was made by our hostess Maureen and served by John. We quickly got spoiled by the three-course morning meals, our first featuring an amazing salmon quiche. We also met Gordon, an older man from Toronto, who was on vacation with his wife Dorothy. Gordon had lots of hints for us, like where to go to exchange our money. And he highly recommended a used bookstore on Queen Street.

But the best thing about Gordon was that he and his wife had just been to see Anne and Gilbertin Summerside, and they highly recommended it. I looked at Mom, and she said, “Let’s do it!” So after buying tickets to the show the next night, exchanging some money at the bank, and finding the used bookstore, we piled into the car and headed for Cavendish and the Green Gables House.

Now, I should mention that we packed sweaters and jeans just in case it got cool, because it was at least in the low 80s by mid-morning. But when we got to Green Gables, about a 45 minute drive away, it was warmer than it had been that morning. So tank tops and capris became our norm.

The Green Gables House was the home of Lucy Maud Montgomery’s grandfather’s cousin. She visited there as a child, and it really did inspire the Green Gables of her most famouos writing, the Anne series. We walked through the barn and the house, both filled with period pieces. 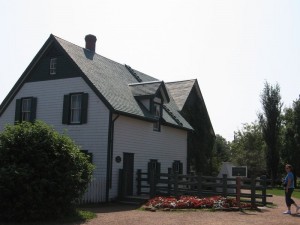 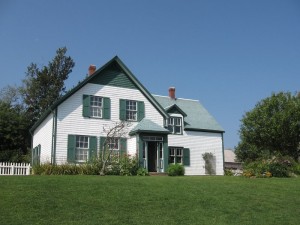 And then we walked along the path called Lover’s Lane. It was a short walk, but filled with the sounds of running water in the creek bed and the gentle hum of birds and bugs. All along the path were placards with information on Maud and her childhood and her love for nature. 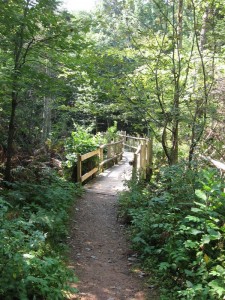 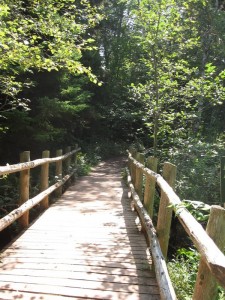 Just as we finished the easy loop, we saw an enormous bird and didn’t realize until later that it was a Blue Heron, one of the most famous birds on the Island. It was so peaceful and the green grass, dotted with colorful flowers, was absolutely stunning.

And then it was time to visit the gift shop. We shopped for nearly an hour, trying to decide on souveneirs for ourselves and the family back home. I finally landed on a blue t-shirt that announces “I Heart Gilbert” and several of Maud’s lesser known books including The Story Girl.

We stopped for lunch at Rachel’s Restaurant, a yellow building that promised a deck view of the ocean, but it was closed. So we ate pizza and headed off to the location of the home where Maud grew up (the home was torn down years ago), just a minute down the street. I can easily understand how she was inspired to write in this location. 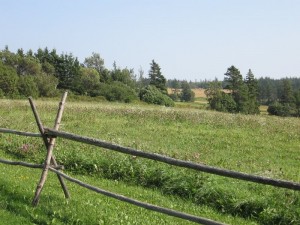 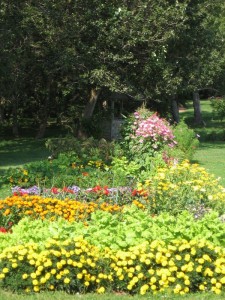 The openness of the rolling fields and the bursts of color make it ideal. And as I walked up the lane that I knew she’d walked up as well, I thought about how amazing it would be to see the home still standing, to see it the way that she would have. I can see how easy it would be to be inspired to write here. I wanted desperately to pick up my pen and paper and write down a story or two. 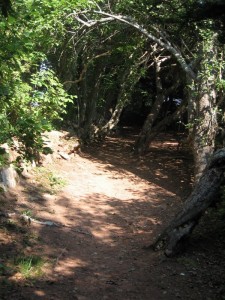 After making another stop at the gift shop and buying even more books (including The Blue Castle, which I’m determined to read this year), we drove off toward the National Park along the North Shore. The road was bordered on one side by the red cliffs along the ocean and pine forests on our right. And then there was a clearing and a row of parked cars, so we joined them and walked down to the beach.

It was absolutely stunning. The waves don’t crash there like they do in California. They clap gently onto the shore. And the red cliffs jutting out into the ocean are breath-taking. 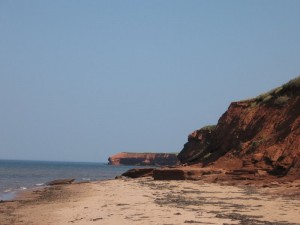 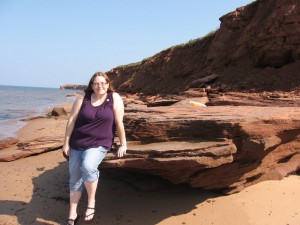 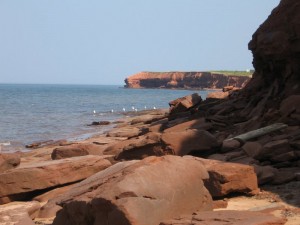 I stuck my feet in the water, and it was warm and clean, not overwhelmingly salty as ocean water often feels to me. 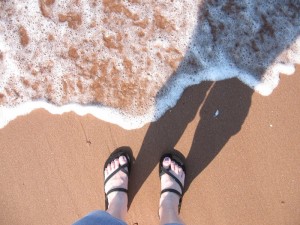 I could have stayed for hours, but the sun was hot, and my skin was turning pink. And Mom had to the use the bathroom. 🙂 So we got back into the car and drove off toward North Rustico, catching a quick glimpse of one of the most beautiful beaches on the Island. After a quick pit stop, we headed toward Dalvay, which we were told was Maud’s inspiration for the White Sands Hotel. It was a lovely old home (turned into a modern hotel) that we didn’t realize until we got home is actually the location of the shoot at the beginning of the Anne of Green Gables The Sequel film. You know … when Anne first meets Morgan when her papers are blowing all over the sand dunes. 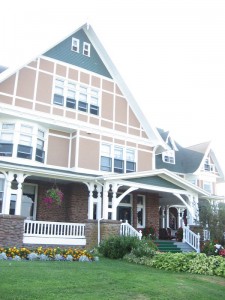 Back in Charlottetown that night, we strolled around the harbor for a bit, seeing our first lighthouse of the trip. It was beautiful as the sun set against the water and families walked and jogged along the boardwalk. 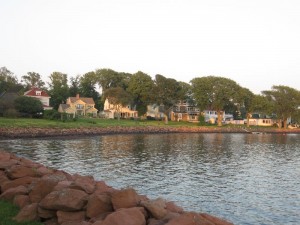 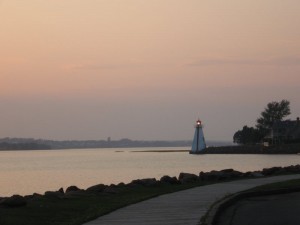 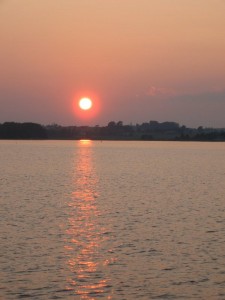 We wrapped up a stunning evening back at CRI and were ready for a drive along the southern shore and the musical the next day.

More from our trip tomorrow!