Thursday, September 2 –
The morning started where all good mornings do at CRI. In the dining room. Cornflake encrusted French Toast with fresh strawberries is a great start to the day, and then we were off.

Off to Rocky Point along the southern coast of PEI. We stopped at another lighthouse, one that we could see from across the harbor the night before. I was terribly amazed at how small this lighthouse was. I guess, in my mind they are like towers. But these must sit high enough that they don’t have to be so tall. 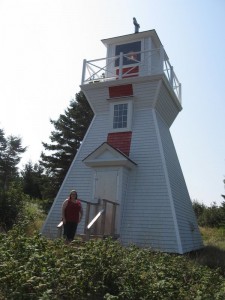 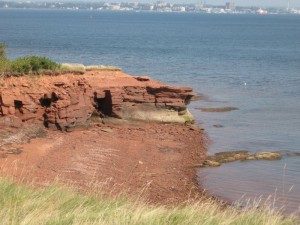 We walked around a small park, along more red cliffs, and saw a sign about how the cliffs erode 1 meter a year, which is a terrible thought but then  turned into a bit of a running joke the rest of the week. “Oh, don’t get too close!” or “Don’t fall in, Mom!”

We stopped at a Provincial Park and wanted to go down to the beach, but it was incredibly muddy, and our final stop of the day would be Anne and Gilbert: The Musical, so we just took a few pictures instead of braving the mud. Shockingly, more red cliffs. Can you tell that I was enamored with them? I just couldn’t get enough. 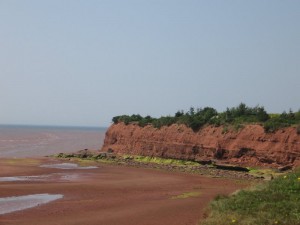 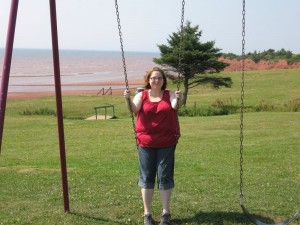 As we drove along, we saw the Confederation Bridge, a 13km engineering miracle that connects PEI to New Brunswick, I believe. We wanted to go out on it, but there’s a $42.50 toll per car, and we would have had to go all the way into across and back. We settled for stopping at a little church and taking pictures from their parking lot. 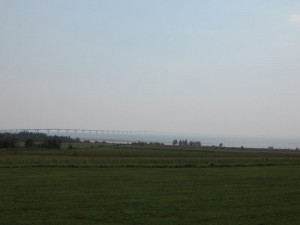 Then we continued along toward Summerside, the second largest city on PEI. When we arrived, we walked along the harbor there, and went into a row of quite colorful shops. 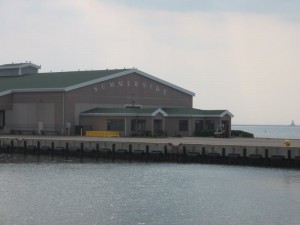 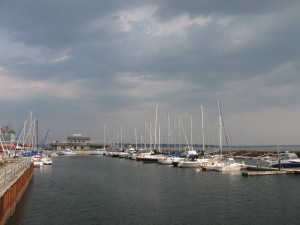 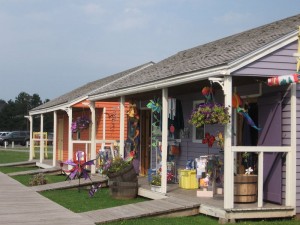 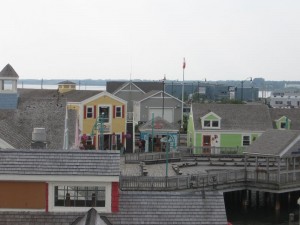 We wound up having dinner in the Deck House Pub (the yellow building in the corner in the picture), but we had to try three different dining areas before we found one cool enough to eat in. It was so warm, and the sun was just beating down. But when we found a table in a corner that blocked the sun a bit but still allowed the breeze and afforded a view of the water, we plopped down to a lovely dinner of Fish and Chips for Mom and chicken fingers and fries for me. (Yup, I’m six.) One thing that really stuck out to me was the clean smell of the air. It wasn’t fishy or filled with sea gulls, although we had seen several gulls around.

Then we changed from our jeans to kahkis (more appropriate for the theater) and headed off to the Harbourfront Theatre for the show. 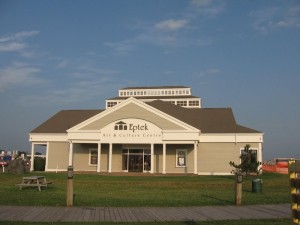 We plopped down in our assigned seats in row E, practically even with the stage. Mom said, these seats would be perfect if no one sat down in front of us. Guess what? No one sat down in the two rows in front of us! So we settled in for the story of Anne and Gilbert as they’re about to take their first teaching positions and then head off to Redmond College.

We LOVED it! What a fantastic show! The songs are so catchy that I ended up buying the soundtrack, and we listened to it the entire next day. And the singing, acting, and dancing were top-notch. I loved how they stage had a ramp on it, that many of the actors used to exit. And Gilbert used it at one point to go “swimming” on a Saturday morning as he sang about the “lobsters declaring war”. It was just absolutely delightful. Easily in my top 2 musicals I’ve ever seen.

Maybe I’m biased because of the topic (who doesn’t love Anne and Gil?) and the location (how fun to see an Anne story on PEI), but this was sublime. I’ll certainly see it again on my next trip to the Island!

We were a bit concerned about driving all the way back to CRI in the dark, but it turned out to be quite easy. We were getting pretty adept at finding our location on the map and following the signs by that point. Then it was time to turn in before we took off for Greenwich and the Eastern Coastal Drive the next day.