Friday, September 3 –
As always, the day started with an amazing breakfast! Maureen created this amazing egg salad on English muffins. And then we were off to Greenwich, a little peninsula along the coast of the on the northeastern tip of the island.

As we drove along that morning, Mom shouted at me that we should stop. We pulled mostly off the road (one of the great things about being on PEI after the height of the tourist season is the nearly deserted roads) and got out and took pictures of St. Peters Church, one of the most beautiful sites of ever seen. I wish my pictures could do it justice. It was incredible. 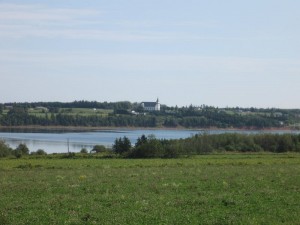 As we headed up to check in at the national park office we drove right by the white steepled-church, picked up our parking pass, and headed down a gravel road toward the acclaimed floating boardwalk.

We’d heard about this from a woman at a gift shop back at Dalvay. She said it was incredible. She was right.

We walked for about a mile down a path that had once led past rows of farm houses, the gulf on our left. As we walked along, suddenly the air was filled with huge, black dragonflies. Diving and dancing. Floating and swarming. They were everywhere, and I  thought each step would bring me into contact with them. But somehow they kept their distance, and we made it past them.

Then through a little forest, over a migrating sand dune, and then we were there, on a wiggling, wavering, floating boardwalk over a marshy area. The boards creaked with each step, wiggled with every ripple in the water, and about half way out, I looked at Mom and asked what had ever convinced me this was a good idea. 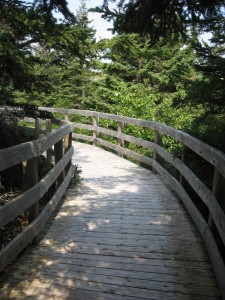 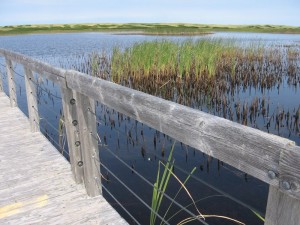 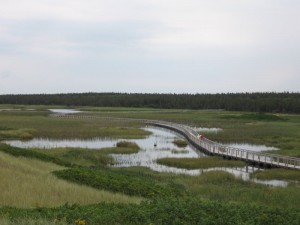 The water below us was brown and filled with moss and I wasn’t sure I could possibly survive if we fell in. But  that was okay, because we didn’t. And suddenly we were climing up make-shift stairs, over a dune, and then there was a beach. 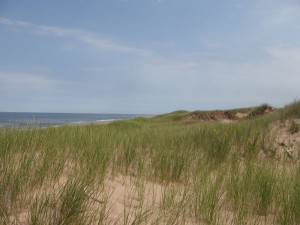 There were only 4 other people on the beach as far as the eye could see, and it was incredible. Both isolating and peaceful. We ran and played in the water, getting our feet wet and leaving a piece of my love for Anne. 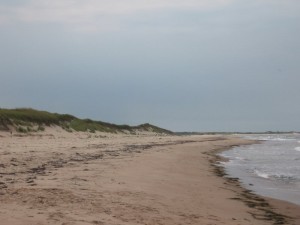 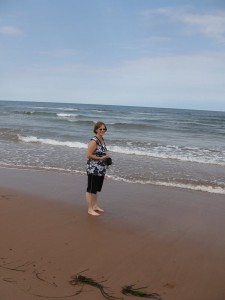 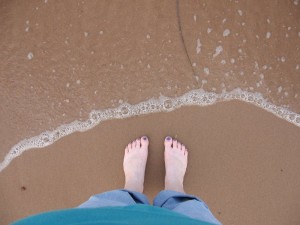 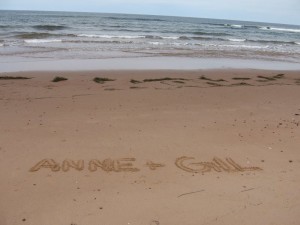 As dark gray clouds rolled in, we decided to make a run for it, not wanting to get caught on the beach or the bridge if it started pouring. And of course we both had to use the restroom, something fierce, so our return trip was something of a speedwalking competition. We were making memories! 🙂

Then it was back on the road, headed toward the lighthouse on the very northeastern tip of the island. But on our way there, Mom saw another lighthouse, so we pulled off the main road onto Shipwreck Point, where we took some more lighthouse/beach pictures. 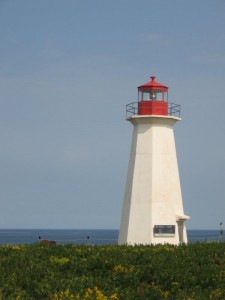 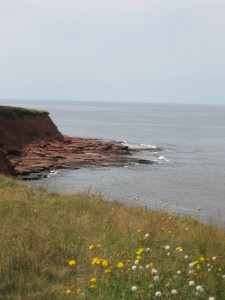 And then had one of our most fun meals at the Shipwreck Cafe in the little tiny fishing village. Of all of the places that we ate on our trip, the view from the big bay windows at this cafe made these burgers the best of the trip. 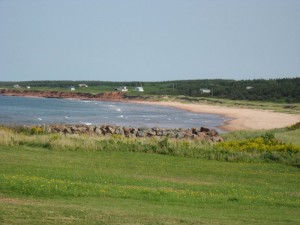 One of my favorite moments along that drive was coming up to Hermanville, which as we passed it, turned out to be one house. I decided it was named Hermanville for it’s only resident. 🙂 I loved that about driving around the island, how the towns on our map were often two houses and a cow pasture. How the 5th largest city on PEI is Montague, population 1800.

We finally made it to the East Point Lighthouse on the northeastern tip. As we drove over a little hill it looked like the ocean would just come up and meet you right there. Except for the yellow sign where the road stops, as if to say: DON’T END UP IN THE OCEAN. 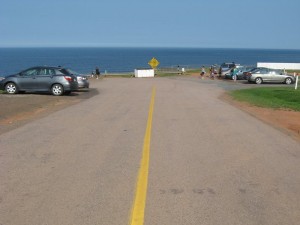 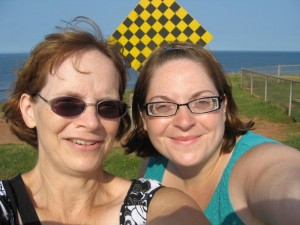 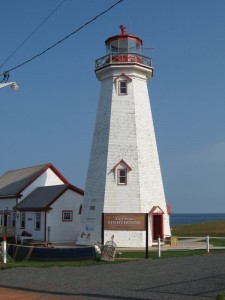 That night as I was falling asleep, I couldn’t help but wonder what the next day would bring as Hurricane Earl barreled toward the coast of Nova Scotia, just miles away from us.