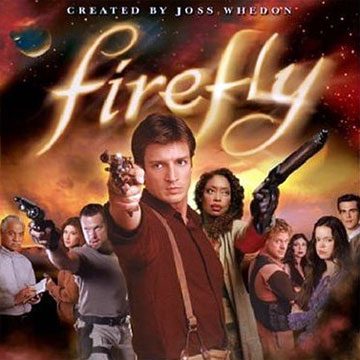 I blame Jess Barnes. My current obsession with Joss Whedon’s Firefly is all her fault. Oh, and it might be the incredible stories, actors, and the fact that it’s a western set in space.

That’s right. I said it’s A WESTERN SET IN SPACE!!!

I know what you’re thinking. How could that be? For your consideration, I present the opening credits of this fabulous show.

This cult favorite aired on Fox back in 2002 and was on air for only 11 episodes (or something like that–the dvd set has several unaired episodes). Set in the future as earth can no longer hold the number of humans, people have begun settling the planets and moons of a new solar system. But just like the old west, settling these new territories is savage and uncertain.

Enter Captain Malcom Reynolds (played by a delightful Nathan Fillion) and the crew of his ship Serenity, a Firefly transport ship. These smugglers fight the rules of the Alliance, which they fought in the war years before. His crew includes Jayne (played by Chuck’s Adam Baldwin), a gun-loving guy with a penchant for getting in trouble and wearing terrible hats. Kaylee is the wide-eyed mechanic. Zoe, the first mate and an old friend of Mal’s from the war, and her husband Wash, the pilot, add both humor and depth. And of course, there’s Inara, a registered companion, who brings respectibility to the ship. Oh. Right. A companion is in fact a high end escort.

It’s such a strange world that Joss Whedon has created, but it’s thrilling and unique and oh-so entertaining. They get around swearing by speaking in Chinese and have some of the best one-liners in any TV series. Smart and funny and filled with characters you can’t help but love. Mal is worth watching the entire show. Wash, his Hawaiian shirts, and the rest are just the icing on the cake.

When the show was cancelled half way through its first season, Joss sought to wrap up the story lines in Serenity, a widely released feature film that was much more violent and lacked so much of the heart that I loved in Firefly. But it still had to be watched because you have to find out what happens.  Right?

Jess, this is all your fault. Yours and Joss’s. So maybe you’re both in good company.

Wishing I was in Mal’s company until next time. -LJ