First off, my apologies for being very unfaithful in posting this week. I will blame it on my writing retreat to Estes Park this last weekend. As previously confessed, I usually write my posts on the weekends, and I didn’t do that this weekend. So I missed my Monday Movie and a lot of really fun stuff that happened this week. But I’ll try to catch you up over the next several days.

Anyway, on to my Friday Favorite – My Boys!

If you think I’m talking about some guys friends, you obviously don’t know me very well. I haven’t had good guy friends since college. Man I miss having dudes around …

Anyway, My Boys is a sitcom on TBS, which just started its third season on Tuesday. It’s all about P.J. Franklin, a sports columnist in Chicago and her boys. There’s Mike, the guy who has no furniture in his home and strikes out with women at every turn. And, of course, Bobby, the adorable and very down to earth millionaire who happens to cover the Cubs for another Chicago paper. Brendan, who went to college with P.J. and is a recently fired DJ trying to open his own club.  P.J.’s brother Andy, who is the only married one in the group finally fessed up in season 1 that his wife isn’t a domineering jerk–he just likes going home at 9 to spend time with his family and get to bed early. Last there’s Kenny, who we want to succeed so much, but he too has no luck with women or most things in life. 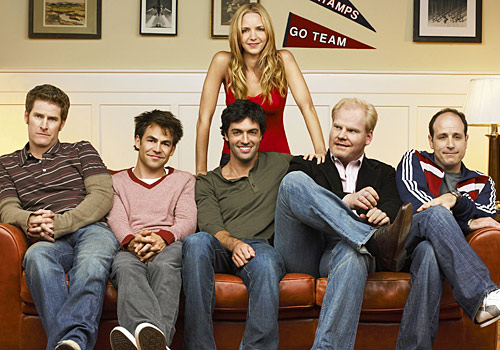 What could be just another show about sports and just hanging out is instead the story of friendship at every level and the love between those friends. When they’re on a high, they celebrate together. They help each other out. And at the weekly poker game, they begin to take chances by opening up.

The third season opener started with a bang and probably one of the funniest contests yet (even better than when the boys decided they would make their own shirts). While standing around at Bobby’s wedding, Mike and Kenny and Brendan decide to have a mustache growing contest. When Andy learns that they’re each going to grow a ‘stache, he says, “Interesting … So even if you win, you lose.”

Amy and I started laughing so hard we had to pause it because we were missing some really great parts. Anyway, don’t miss this show! It’s great and so deserves a strong fan following. It has at least one. Me!

Until next time. -LJ

One thought on “Friday Favorite – My Boys”