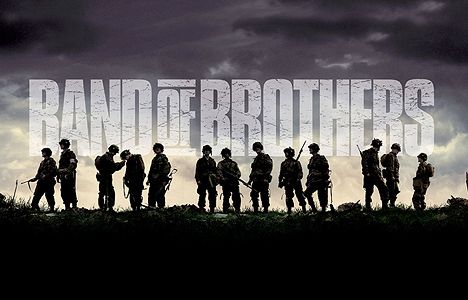 If you’ve seen my twitter updates, you won’t be surprised by this weeks Friday Favorite. I’ve spent the better part of every evening the last week or so watching the HBO miniseries Band of Brothers, which I borrowed from the library with the specific intent of watching it with my friends Jess Barnes and Jess Lacy. But Lacy’s grad school and Barnes’s family commitments kept us from actually getting to watch it together. So I had a decision to make: return it to the library and wait another 4-6 months to get to check it out again or watch it on my own?

Since both Lacy and Barnes had already seen it, I figured I’d make a go of it. And if I didn’t like it, I’d just take it back to the library. No problem, right?

But just the idea of not liking it? Ha! What a laugh. How could you not LOVE the 10-episodes about Easy Company? I certainly can’t. But let me back up here a little bit for those of you unfamiliar with it.

Back in 2001 a little miniseries aired on HBO called Band of Brothers. Based on the book of the same name by Stephen E. Ambrose and helmed by none other than Steven Spielberg and Tom Hanks as executive producers, this epic takes us on the journey of Easy Company, 506th Regiment of the 101st Airborne Division, U.S. Army from training to D-Day to the Battle of the Bulge to Hitler’s Eagle’s Nest. This elite company of paratroopers were the first in military history to jump from airplanes behind enemy lines. They sustained a 150 percent casualty rate and now, all of them over the age of 80, their heroism is glimmered in this amazing story.

I love so much of this series. I don’t even know where to begin. So perhaps I’ll start with the disclaimer. That is that Band of Brothers is not for children or adults with sensetive stomachs. The battles are bloody, the language often foul, and themes heart-wrenching. And you’ll walk away from it with a new respect for the men who fought in WWII.

I want to continue, gushing about this fabulous miniseries, and yet I’m afraid that my words can’t do it justice. How can I possibly put into the words the emotion that choked me up with each interview of the real survivors of Easy Company that begin each episode? How can I begin to express the respect that I’ve gained for these men by watching their stories?

Maybe I can start with a quick sum up: Everything I ever needed to 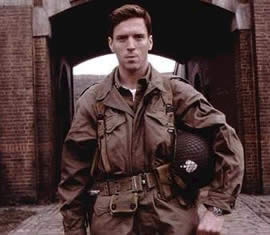 learn about leadership, I learned from Dick Winters. Lt. Dick Winters (played by Damian Lewis, who I already loved as Charlie Crews in Life)(Seriosly I just spent 20 minutes going through my blog archives looking for a Friday Favorite about Life, but apparently I haven’t done one yet. That will be remedied.) is the man that all the others in Easy Company look up to. He’s the one that goes on training runs up the mountain with his men, even though he’s been assigned to an easier task for the moment. He’s the one who builds up the men, and as he’s swiftly promoted through the course of the war, he continues to be a leader with integrity and bravery. He leads his men into battle, never asking them to do anything he wouldn’t do. He’s fierce and kind, strong and compassionate. He never took leave, and wouldn’t stray from the side of his men. As he was promoted, I could tell that his heart broke as he moved further away from the men of Easy. If I could work for anyone, I’d want to work for him.

And then there’s Lewis Nixon (played by Ron Livingston of Office Space fame), Winters’ best friend and the intelligence officer of Easy. For all of Winters’ morals, Nixon struggles with the opposite, seeking peace in the bottom of a bottle. He doesn’t find it there, but his friendship with Winters is an amazing thing to behold. 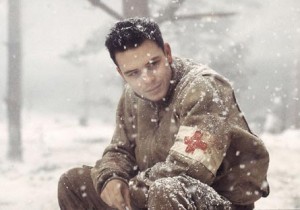 Each episode is told through the eyes of one of the men of Easy. One focusing on the replacements, one on the senior noncom (noncommissioned officer), one on one of the original soldiers who was injured and away from the company for 4 months. One of my favorites was from the medics perspective. My heart broke as we watched him try to save men and lose them. And it soared when he tried to save them and succeeded. Mostly I loved watching him run from fox hole to fox hole looking for supplies for the men, putting himself in danger every moment so that he’d be ready when they needed him.

One really shocking moment for me was in the 9th episode. By this time the German army had surrendered, and Easy men were out on practice patrol. They stumbled on something they didn’t understand. Something they’d never seen before. One of them runs back to camp to find Winters, who brings translators. They’ve discovered a consentration camp, abandoned by the Germans, but still full of prisoners. But they didn’t even know what it was. They didn’t know why the men inside had been locked up, starved, and many killed. It broke my heart when the men of Easy realized that they’d been locked up and treated worse than animals because they were Jews. I just couldn’t imagine that they’d been fighting for nearly 2 years, and they didn’t have any idea what Hitler had been up to.

This undertaking was enormous, and the number of actors and extras extraordinary. I can’t count the number of times I realized I was watching an actor I recognized. From David Schwimmer of Friends fame to James McAvoy to Donnie Wahlberg to Neal McDonough to Jimmy Fallon. 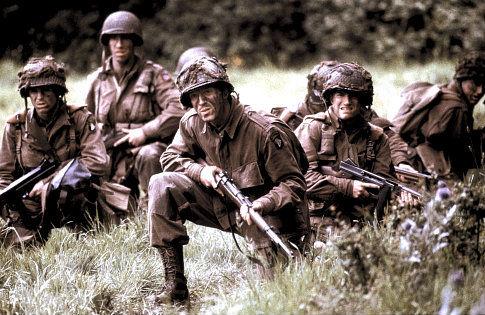 They all played a role, some big. Others small. But it seemed every episode I was saying, Hey! I know that guy from something.

On top of this amazing story, told incredibly well, the DVD set includes really interesting special features. There’s a video diary from Ron Livingston showing the actors boot camp, more detailed interviews with Easy Company veterans, a making of featurette, interactive field guides, and much more. Kuddos to Hanks and Spielberg for equipping their audience to really begin to understand what Easy Company meant to the war and the world.

As I mentioned before, each episode began with interviews from the survivors of Easy. But they weren’t identified until the end of the last episode. How incredible to get to see the men who actors were portraying. Of course when they were interview in the late ’90s, these men were in their 60s and 70s, but to hear them talk about their experiences is incredibly moving. It still brings them to tears. And it brought me to tears too. One of the men said at the end of the interviews that he’d received a letter from one of the other men in Easy. In the letter he wrote that his grandson had asked if he was a hero in the war. He replied, “No. But I fought in a company of heroes.”

Well … there you have it. My completely inadequate post about one of the best miniseries I’ve ever seen. So if you’re looking for a Christmas present for your favorite author, forget this. I don’t think Francine Rivers wants it. But I do!

So thankful to have been born in a country where these men are recognized and honored until next time. -LJ