A recent issue of Entertainment Weekly highlighted what they consider THE 10 BEST TV SHOWS RIGHT NOW! 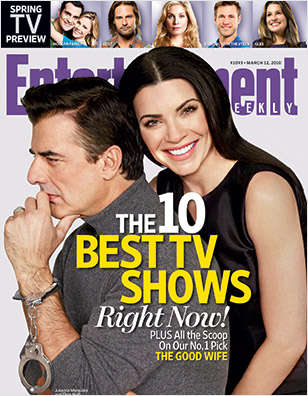 Of all these “great” shows, I only watch two of them regularly. Of course, I’ve told you about my love for Friday Night Lights, which is just a brilliant character study, and I can’t wait for the new season to start in April on NBC. Those of you with Direct TV have already had a chance to watch it, but the rest of us with regular cable are on pins and needles. 🙂

And the other show that I watch on this list? Well, it’s actually The Good Wife.

I wasn’t actually interested in watching this show when I first heard about it. A show about the wife of a politician involved in a sex scandal? No thanks. I get enough of that in the news. I’m not really interested in more.

Or so I thought.

But after one episode, I was hooked. How could I not be? Julianna Margulies as the wronged wife Alicia Florrick and Chris Noth as former state’s attorney Peter Florrick offer layered and intricate performances. Josh Charles (a favorite from Sports Night) plays Alicia’s boss, a partner at the law firm that is the scene of Alicia’s return to law after 15 years away. And might he be a love interest? Only time will tell, but I kind of hope so.

Dynamic performances by supporting cast members Christine Baranski and Matt Czuchry (Gilmore Girls) and interesting stories make this a wonderful procedural. Add in the drama and heart of Alicia’s personal struggle to forgive and embrace her husband, and the show becomes absolutely fabulous!

So those are my two shows on the list. Which ones do you watch? What do you think should have made the top 10 that didn’t?