Did you watch the Oscars this last weekend? It probably won’t surprise you that I did. I got together with Jess and Jess to watch the biggest award show of the season. And based on previous posts, I’m betting you won’t be surprised by which movie I was rooting for.

Umm … yeah. It was The Hurt Locker. *insert cheesy grin here* It had nothing  just a little bit quite a bit to do with Jeremy Renner’s performance. He was just amazing as a solider who has become addicted to the adrenaline of war.

Of course, the big competion was Avatar, which I feel I should disclose that I haven’t seen. Honestly, I’m not sure I want to see it, but that’s beside the point.

That probably makes you wonder what my point is … okay, okay. I’m getting there. Just very slowly.

Recently a friend of mine commented to me her disappointment that The Hurt Locker beat Avatar out for Best Picture this year. A bit surprised, I wondered what brought that on. She said that clearly Avatar–being the bestselling movie of all time–is the most popular movie, which means it must be the best film.

*scratching my head* Really? Is that the test by which we decide quality now?

Umm … May I raise my hand and file a small rather large complaint with that logic?

Now I’m not saying that there aren’t some wildly popular things that are well made, quality entertainment. Case in point, my novel The Kidnapping of Kenzie Thorn. Just kidding! Okay, in all seriousness, I’d like to offer the Harry Potter series for consideration. Wildly popular? Yes. Brilliantly written, plotted, and filled with creative characters? Yes. But I think this might be the exception, rather than the rule. While I’d like to give some examples of popular media with … shall we say, less than stellar quality, I’m certain to offend fans of said popular series. So I’ll refrain.

But let me just say, although The Hurt Locker hasn’t been seen by as many people as Avatar and it will probably never make as much money, that doesn’t mean it wasn’t worthy to win the award.

This week’s teaser is:
“But Adam heard the current of satisfaction and even glee lurking beneath. He knew his brother’s itch for trouble had grown to an all-out rash lately, and any pretext to attack the Specks wouldn’t be overlooked.”
pg. 33  – The Bride Backfire by Kelly Eileen Hake

– Another pick-up from the library, I haven’t really started this book, but it looks cute. In the tradition of the Hatfields and McCoys, this is a story of family grudges and forbidden love. What’s not to enjoy? 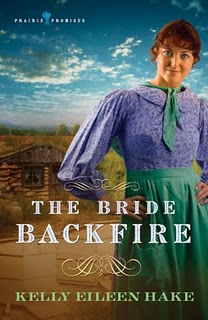 In the life of every author there’s a moment of pure joy that makes all the hours of brainstorming and nail biting and hair pulling worth it. It’s the moment when you realize that your book is finally, actually, truly available to be purchased. That happened for me this week when I realized that my next book, Vanishing Act, is available for preorder on Amazon.com and CBD.com! It officially releases August 10, but it looks like CBD might start shipping them out at the beginning of August.

I don’t have any cover art to share yet (but I’ve seen the first draft, and it looks AWE-some!) but I can still give you a sneak preview about the book. Here’s the synopsis:

ON THE RUN
Eighteen months ago, Nora James watched as her father was shot in
an alley-and then she fled. She changed her name, her appearance
and her job, hoping to keep her father’s shooter at bay. For months,
it worked…but now her luck has run out. A ruthless assassin is on
her trail, and soon Nora, now known as Danielle, will be found. But
this time, she has FBI agent Nate Andersen by her side-right? The
handsome agent would give his life to protect Danielle, but he’s wary
of giving his heart…until a deadly confrontation leaves him with
both on the line.

Stay tuned this spring and summer for giveaways to celebrate the release. So glad to get to share this with you. 🙂

Well, okay. I’m not so good with poetry, so I’ll put an end to my terrible ode and just tell you why I love the library, specifically the one here in Colorado Springs.

So I’ve been waiting … not patiently at all … to read a YA that came out last year. I’ve put it on my Paperback Swap wishlist, but to no avail. So I finally looked it up in my libraries online catalog. But they didn’t have it.

I was lamenting this fact to Katie the other day, and she suggested that I might try seeing if the library would order the book for me. What a novel concept. I had no idea that libraries would do that for just one patron–especially one who lost a book last year and sometimes forgets to return books on time.

I called them, and a lovely resource librarian there put in my request for the book. And if the library decides to order it, it’ll be here in 2 months. AND it will automatically be put on my hold list when it arrives.

So thank you, PPLD. I will honor you by not concluding my ode until next time.

What is it about Jane Austen’s stories that make nearly every girl I know giddy as a schoolgirl? Is it the strong 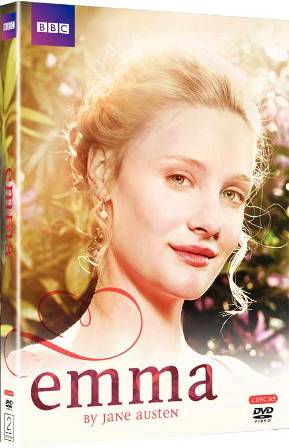 heroines? Or the gorgeous dresses? Or the beyond belief heroes?

My money is on the hero.

Some might say that Austen’s Emma is her least likeable heroine. A headstrong matchmaker who can’t seem to pull her nose out of everyone else’s lovelives, Emma Woodhouse (masterfully played by Romola Garai) is matched in her wit and poise only by Mr. Knightley (handsome as ever Johnny Lee Miller). Sixteen years Emma’s senior, Knightley is a lifetime friend of the family, whose brother is married to Emma’s sister.

The worst scene in the 4-hour miniseries is also the most powerful as Knightley chides Emma for her cruel tongue toward a fellow picinic goer, a poor spinster. Though it breaks my heart no matter what rendition of the movie I see, it shows more than anything else that Knightley loves her.

Oh, to have a man of integrity, character, and humor. Perhaps that’s why Ms. Austen’s heroes are so appealing. 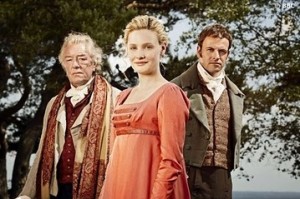 Now available on dvd, don’t miss out on the newest addition to the library of Austen classics.

As for me, Katie, Steph, and Amy, we had a great time watching this on Saturday afternoon. Even though it included dodging the relentless rays of the sun coming through the windows above the television, which turned into finding creative seating in the living room.

So while the movie was fantastic and the company lovely, the best part of the day was the Pioneer Woman Queso Dip provided by Steph. A-MAZING!

Wishing you all the Austen you can handle until next time.